What You Might Not Know About Frontera and Concession Agreement 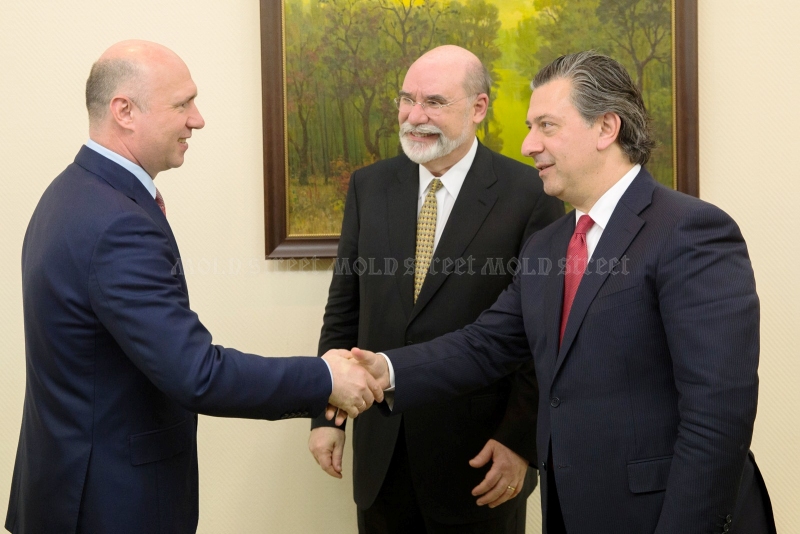 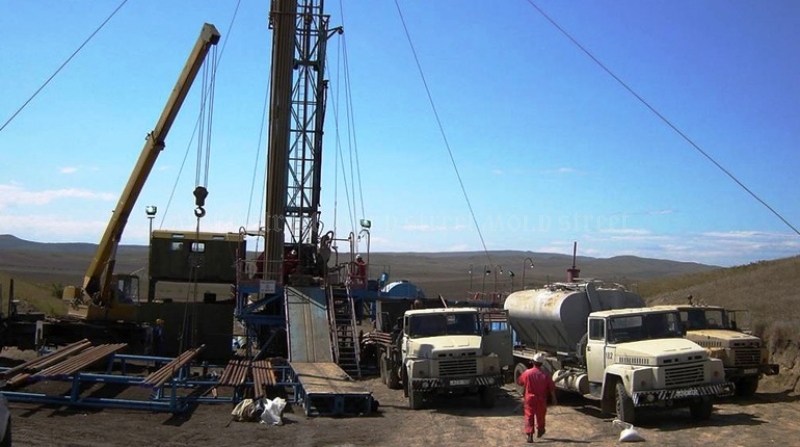 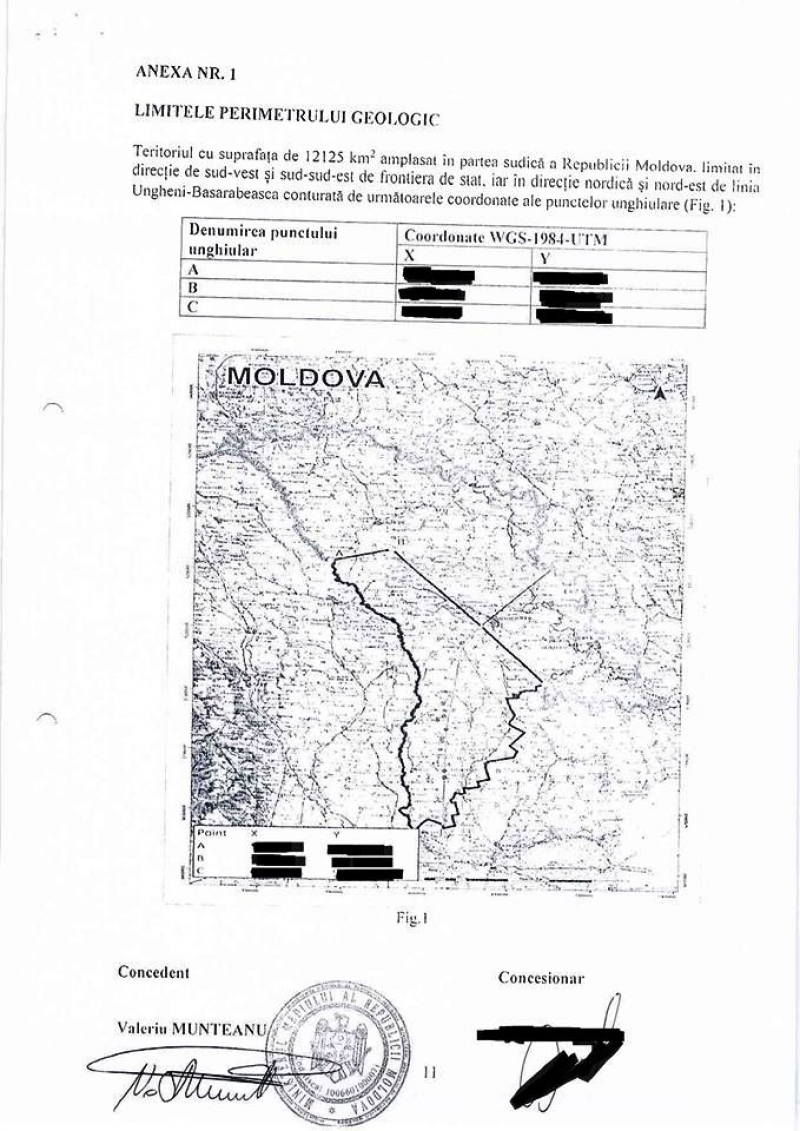 BNS
Heated debates continue around the agreement on concession of the geological surveying of fossil energy reserves in Moldovan soils and their commercial development, which was signed between the Moldovan Government and Frontera company on January 2, 2017.

An online outlet even suggests that our report on this issue is a fake and Environment Minister Valeriu Munteanu released the agreement to the public on the second day of the newly-starting year. The same day Monitorul Oficial – the official gazette of Moldova – published a Government Decision from December 30, 2016 on concession of the rights for geological surveying for fossil energy resources in Moldovan undergrounds; the decision acknowledged that the agreement had been signed.

Someone had worked hard on the New Year’s Eve to enable the publication of the Government Decision as an emergency. Those who wonder why this emergency will have to wait for a few months to get the answer.

Mold-Street.com too has prepared a few questions about the concession agreement with Frontera:

When was it decided to organize the contest for concession?

On April 25, 2016, the National Board for Public-Private Partnerships reviewed a proposal on concession of fossil fuel deposits in Moldova. The minutes (picture below) from that meeting was published by the Public Properties Agency and stated that the Board decided to turn down the proposal. 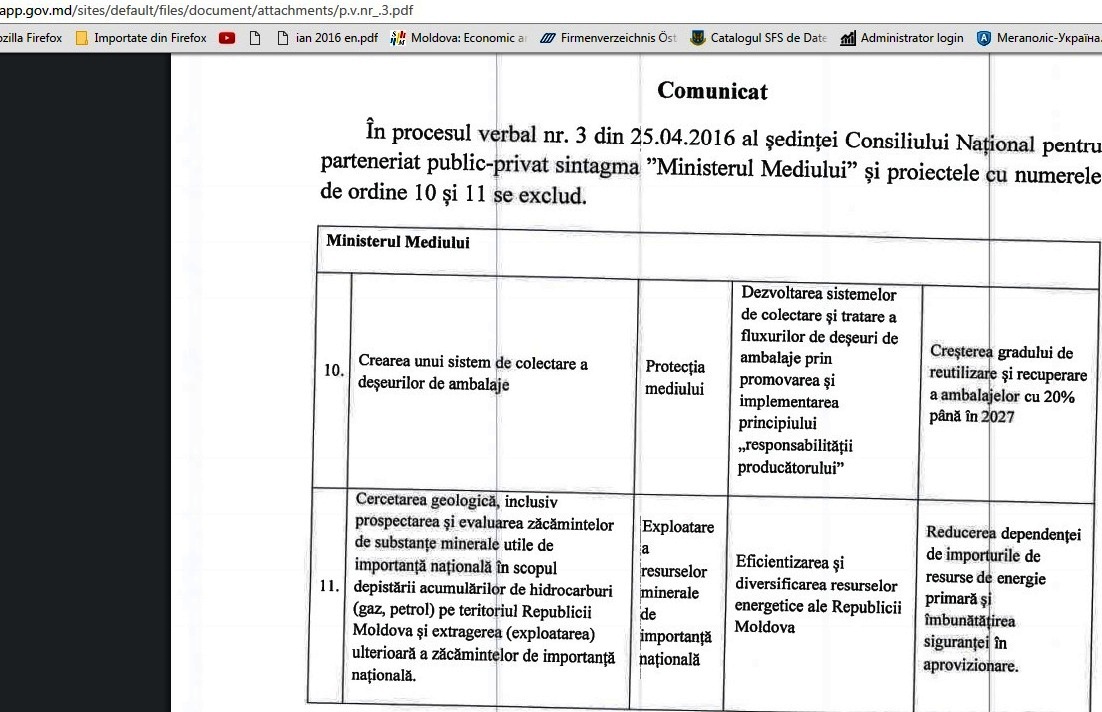 Nonetheless, the Government on July 20, 2016, decides to take its chance with the geological surveying and deposits exploration.

In early September of 2016, Maria Şendilă, of the Public Properties Agency, told Mold-Street.com that there was a mistake in the text. The same month an edited version of the April 2016 minutes appeared on the agency’s website.

Which bidder did respect the competition conditions?

A commission led by Environment Minister Valeriu Munteanu picked up Frontera Resources International LCC as the winner on November 1, 2016. His office said in a press release that two companies had participated in the competition, the other one being Overseas Minerals Corporation. Formally one of the basic conditions which the authorities put forwards was respected – the presence of at least two competitors. However, it is not clear where the two competitors resided and who were their owners.

For example a company named Overseas Minerals Corporation is registered in London and its founder is a firm with the same name registered in the British Virgin Islands. Its administrator was Salome Vakhania, a psychologist in the United Kingdom. The firm however was closed in 2015.

Vladislav Stropșa, head of the Geological Department at the Moldovan Agency for Geology and Mineral Resources (AGRM), said that Overseas Minerals Corporation which had participated in the competition was from the British Virgin Islands. Its bid was turned down for “failing to comply with the condition requirements.”

Who is behind Frontera?

An offshore from the Cayman Islands.

It was Frontera Resources International LLC, based in the U.S.A., o win the competition. Unfortunately, Mr Munteanu, the environment minister, black painted the company’s legal address in the agreement which he posted in his Facebook timeline – as if it’s a big secret.

„Speculations of the kind that the American firm is not quite American but is an offshores’ daughter should be dismissed by the presence of Mr James Pettit, the U.S.

Ambassador to Moldova, at the final meeting [between Moldovan authorities and Frontera senior officials] where he assured that this is a reputed company in the United States,” the social media post goes on.

Well, let’s look at official information. Frontera Resources Corporation, which is based in Houston, Texas, says on its website that it is “a fully-owned subsidiary of the Company.” Its audit report for 2015 says the company was founded by a homonymous company based in the Cayman Islands, one of the largest tax paradises in the world.

Frontera is under the bankruptcy clause

Whether this is a trustworthy company or not we can learn from its financial reports. Our readers can learn that Frontera faces serious financial hardship and its shares at the London Stock Exchange fell seven times in 2016 alone. This denotes investors’ pessimism and gloomy prospects for the company. In 2011-2015 the company worked in loss and its revenues declined.

Frontera Resources also has been drowning in litigation with the government of Georgia for attempting to shirk from paying 30 million dollars in debts by the start of August 2016. The company claimed the debt would be paid by the Frontera subsidiary in Georgia and filed for protection under the local bankruptcy law.

Brokers and analysts at the London Stock Exchange reacted with disappointing comments over this maneuver: ”… a management team would not think that they owe monies that are borrowed either shows intellectual deficit, moral deficit or both … this is all the more repugnant as we are sure that they have continued to pay themselves handsomely.”

Only at the end of 2016 did Frontera announce about restructuring the company’s debt until August 2020.

Frontera keeps saying for years that the area which Georgia conceded for prospects has an immense potential but production has not match the expectations so far.

In February 2016, Frontera Chairman and CEO Steve Nicandros proudly announced that the gas fields in eastern part of Georgia preserved approximately 5 trillion cubic meters of natural gases. Georgia would become a gas exporter within three to five years from now on and would be able to supply natural gases to Turkey and Eastern European countries, Mr Nicandros told the press.

„Frontera once commissioned an assessment report regarding the potential of certain fields and the paper gave a positive prospect for existence of Georgian gas resources, but the findings never were confirmed as possible for production,” the Georgian official was quoted as saying.

What fields did Moldova concede?

Frontera has said in a press release that it has the exclusive right to explore for, produce and develop hydrocarbon resources within an area comprising approximately 3 million acres situated in the southern part of the country. The overall term of the Concession Agreement is 50 years from the date of its execution, including an initial exploration phase of up to ten years.

The exact area and perimeter where prospecting would be carried out: 12,125 square kilometers, or about 36% of the country’s territory. Annex 1 to the agreement suggests that such works would be done in some of the suburbs of the capital, too.

Investments of millions of dollars

The company has promised to invest 6 million dollars within the next five years. This isn’t too much if readers mind that prospecting operations are very expensive.

Igor Nicoară, director of the Geology and Seismology Institute of the Moldovan Academy of Sciences, is not impressed at all.

„This is a very small amount. A single probe as deep as 500 meters would cost somewhere between 500,000 and one million dollars. The six millions which the company announced should be allocated for other activities than prospecting,” Mr Nicoară told the station JurnalTV in Chișinău.

The expert also remembered of another experiment with gas and oil exploration in Moldova, again with an American company. In 1995 Moldova conceded prospecting and production of fossil fuels to Redeco Ltd, from Texas. It did extract some gas from southern Moldova before withdrawing but it never told its government how much volume of reserves the ex-Soviet country should count on.