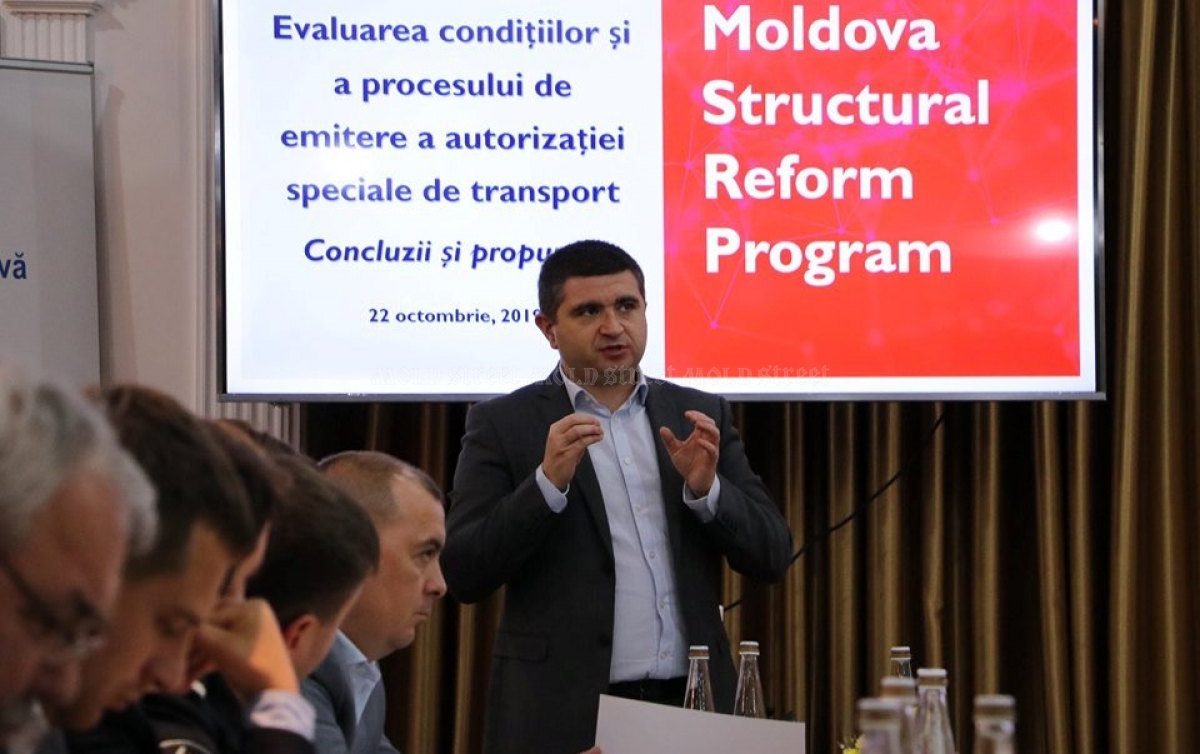 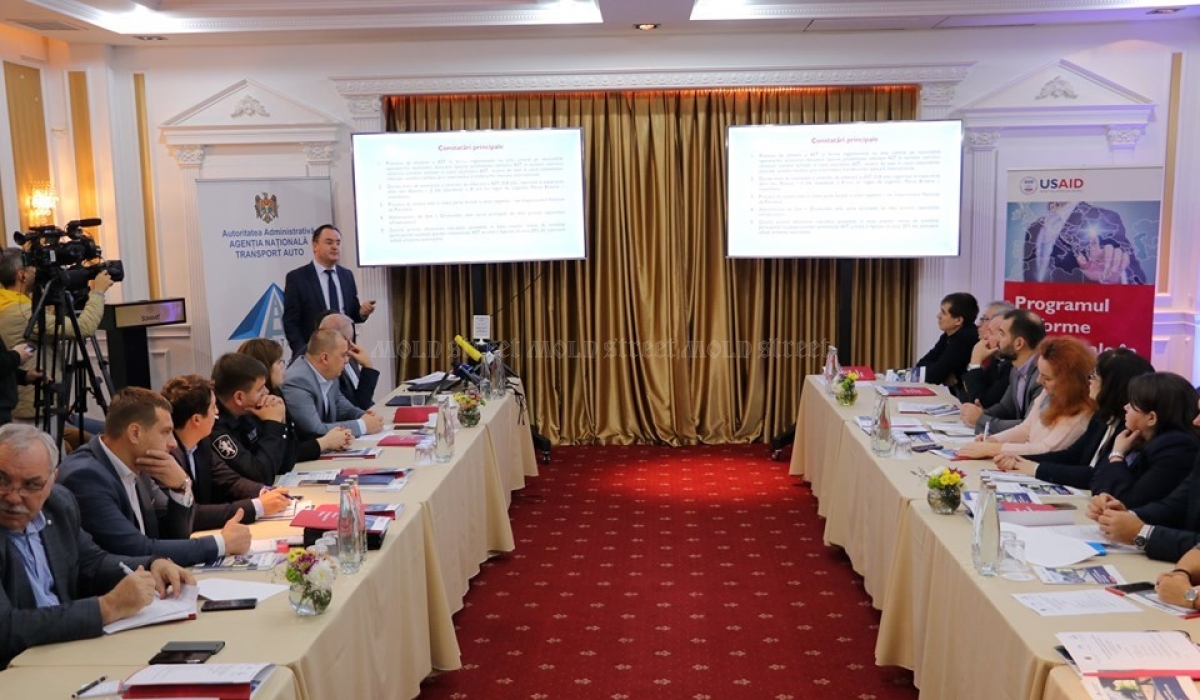 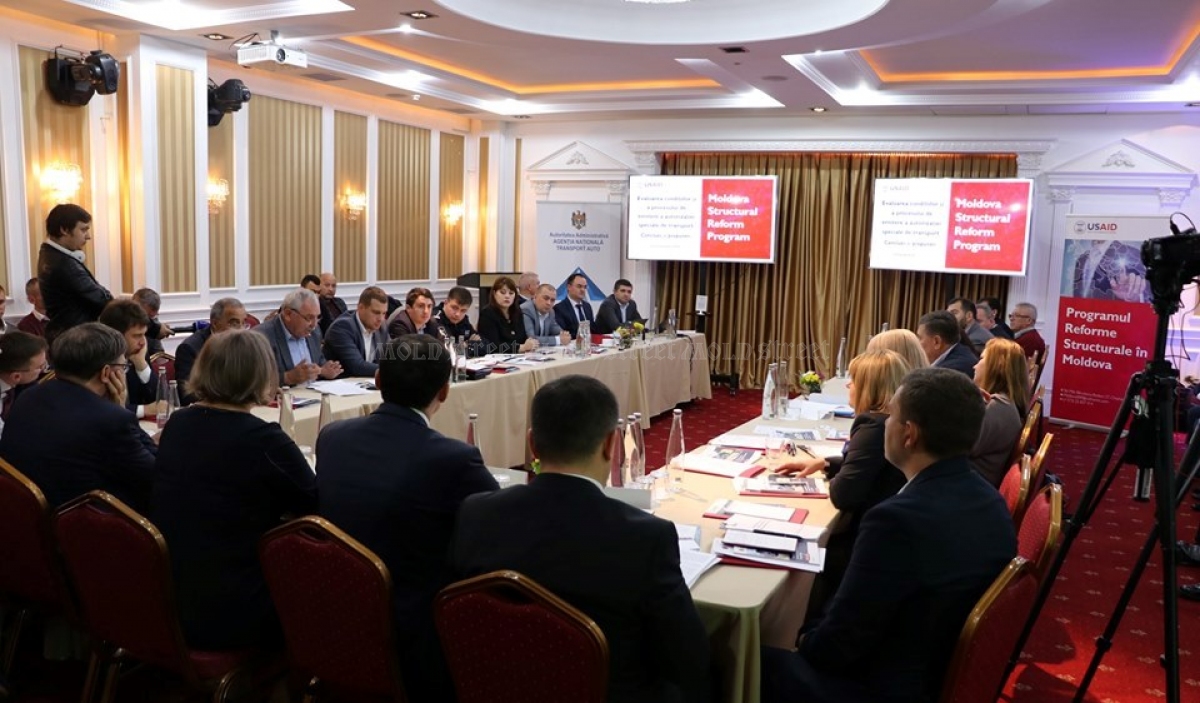 BNS - publicitate
Duties which Moldova levies for the Special Transportation Permit (STP) for vehicles that use public roads but are heavier or larger than admissible limits, may be 40 times higher than in neighboring countries such as Ukraine, Romania, or Belarus, according to simulations which the experts of the USAID Moldova Structural Reform Program have carried out.

A case study shows that a company that shipped heavy hardware from the Netherlands to Moldova paid 40 euros for hundreds of kilometers of Poland transit and around 800 euros for 200 kilometers in Moldova. This puzzled the transporter – why he had to pay a tax 20 times higher in Moldova than in Poland, where roads are in a much better state. 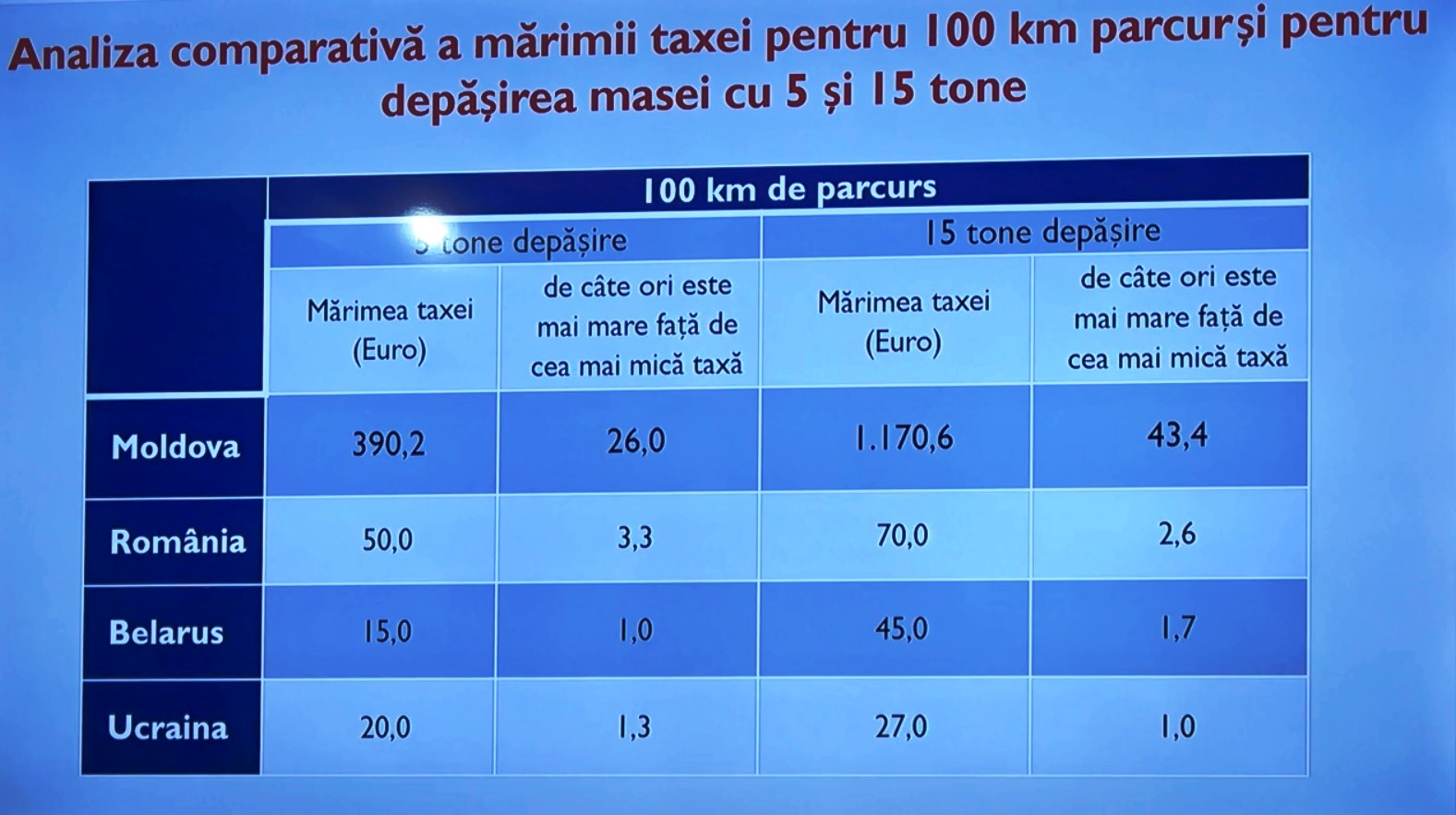 This, according to experts, represents a significant barrier in developing the road transportation industry, encourages corruption, and informal services. In the given context, the USAID Moldova Structural Reform Program (the USAID Program) has carried out an analysis of the entire process related to the issuance of the STP; it has identified the main gaps and has developed more than 40 recommendations designed to improve the situation in this sector.

” We are now entering a particularly intense and interesting stage. This meeting will begin the phase of actively discussing changes to be made to the regulations and the fee structure and we have our fingers crossed for this and hope for a fruitful cooperation in the future,” said Douglas Muir, Chief of Party of the USAID Moldova Structural Reform Program, while explaining the study.

What is the Special Transportation Permit?

The Special Transportation Permit is a permit issued by ANTA, Moldova’s national road transportation agency, for the use of public roads by vehicles that are larger or heavier than national standards provide for. The permit is required for whole, non-dividing goods such as a crane or a windmill pillar and the costs depend on its weight and size. The bigger the pressure is on the road surface the higher is the duty that the state charges for damages to its infrastructure. This is the logic that is applicable in Moldova and it is far from the practice of many European countries. 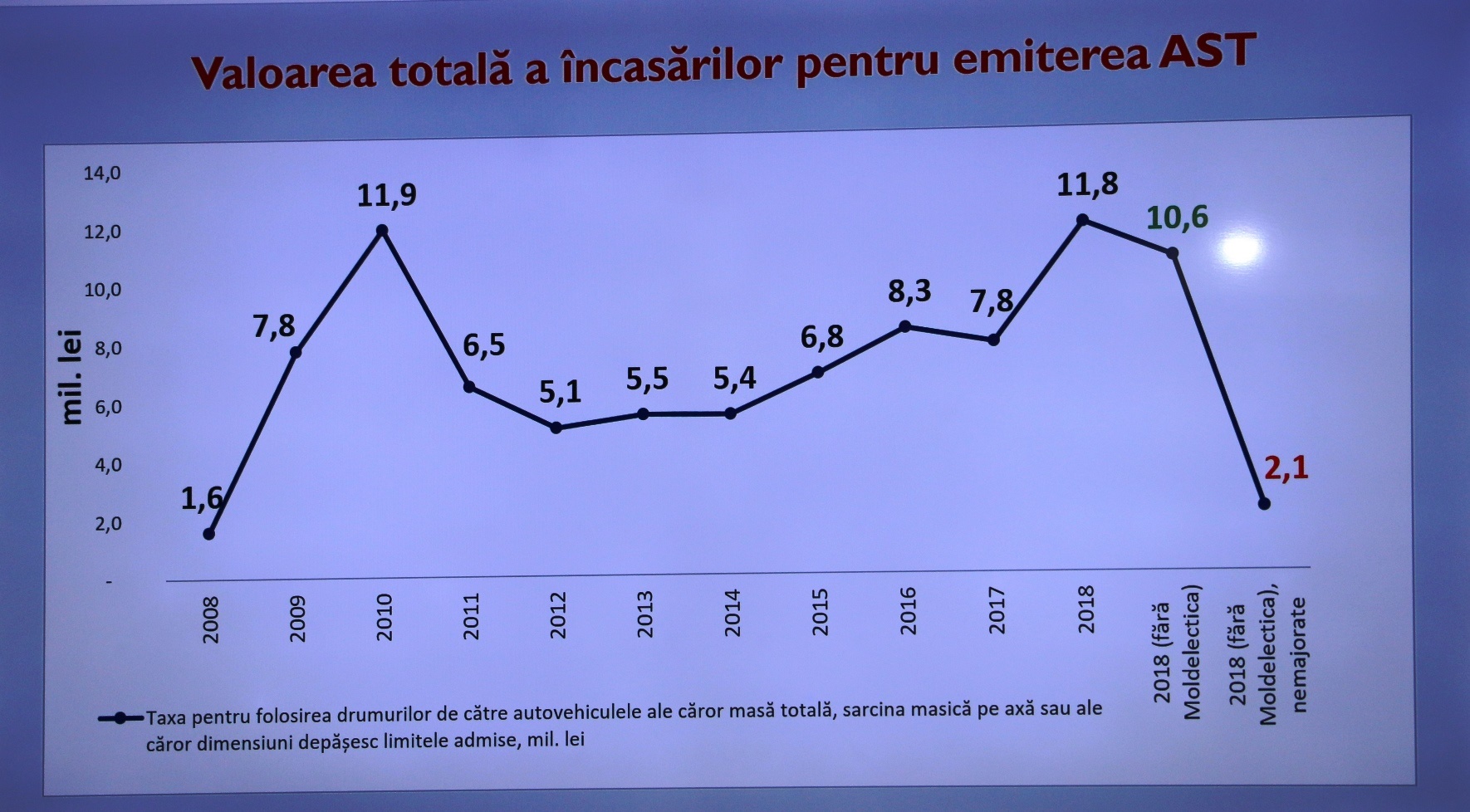 The program’s experts have concluded that the exaggerate financial burden is the biggest challenge within the issuance process of the STP. They analyzed the entire chain of the STP issuance for transporters of extra-large or heavy goods, discussed with ANTA officials, and transportation firms from Moldova and other countries.

Everyone agreed that Moldova’s tariffs are too high and in 20% of cases represent the reason why transportation services are turned down. In spite of this worrisome trend, the tariffs have increased 5 times over the past few years.

Although the tariffs have increased 5 times, the public revenue from special authorizations increased only 40%. Small firms tend to lessen the number of applications for ANTA’s special permits while international companies shipping extra heavy/large goods to customers beyond Moldova ultimately decide to circumvent its territory.

The formula used to calculate the duty takes into account both the weight and the size such as length and width. Each kilometer of journey costs transporters of such loads between 5.5 and 11 lei per extra ton beyond the admitted level, plus a duty for the excess of the total mass or oversize. The oversize duty may amount to 162 lei per kilometers. In one particular case a firm that needed to move a windmill pillar from south to north inside Moldova, was charged over one million lei. Under these circumstances investment in Moldova’s renewable energy industry is almost meaningless, given situations when a project requires shipping large / heavy items within the country.

Tariffs need to be linked to road quality

During the study presentation, the experts of the USAID Program compared the situation in Moldova with the practice in countries like Estonia, the UK, Romania, Belarus, and Ukraine. The comparative analysis of the transportation tax for freight that exceeded the allowable mass shows that Moldova’s tariffs are tens of times higher than its neighbors normally charge under similar conditions. The shipping of an extra 15 tons above the norm as far as 100 kilometers would cost the transporter some 27 euros in Ukraine, or 45 euros in Belarus, or 70 euros in Romania - but more than 1,170 euros in Moldova! This is 43 times as much as in Ukraine, though Moldova’s quality of roads won’t fare better than in any of the above-mentioned countries.

The experts suggested that a possible model would be to set out duties according to the country’s standing in international road quality charts, or at least closer to the tariffs applied in neighboring countries. In 2018, according to the World Economic Forum, Moldova ranked the 88th in a pool of 140 counties surveyed for road quality.

Another viable solution would be to change the current model of tax calculations (a model that matches exactly the covered distance) and switch to a different model based on segments to be covered (as in Estonia), or based on limited time frames of validity of STP, for any part of the road infrastructure (as in Romania or the UK). 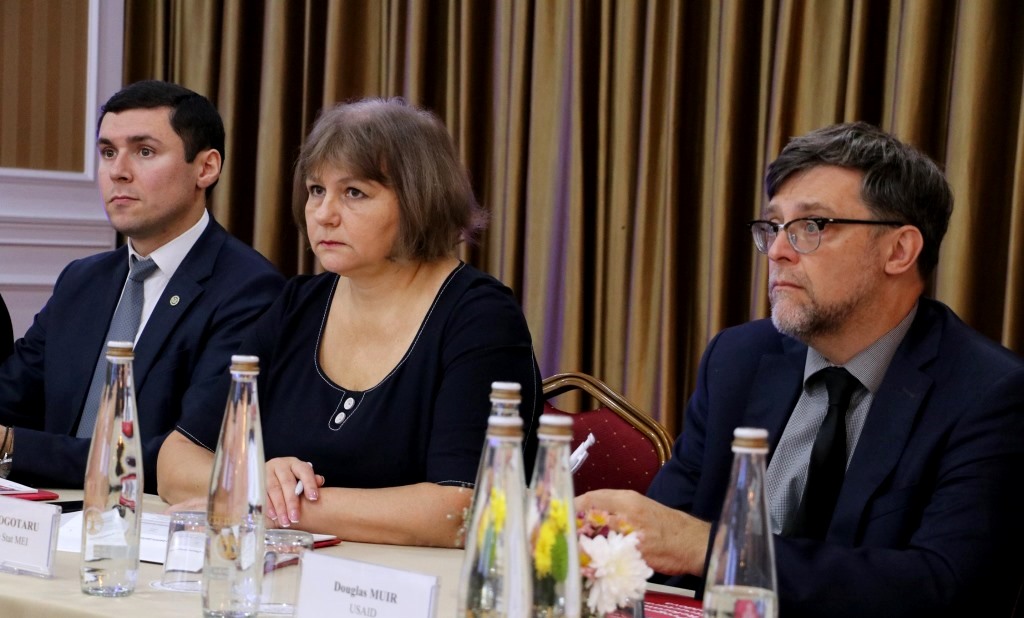 Refunds of STP payments and other recommendations

Throughout 2018 there were issued 979 STPs, of which only 49 to new applicants. Moldova’s special transportation authorizations are valid 30 days and no refunding exist for unused or delayed use of those authorizations, therefore inflicting huge losses on many transporters. One out of five shipping companies dropped their plans to apply for a STP, and the unbearable cost of service is likely to be the cause.

Another aspect that needs to be addressed is the time applicants wait for a permit - usually between five and eight days - and there’s no fast processing procedure as Estonia has enforced for emergencies.

The presented recommendations have been passed onto the Moldovan Ministry of Economy and Infrastructure and shall be publicly consultated with the expert community and business professionals. The conclusions will be upgraded to formal proposals to amend the existing legislation in this field.

”The USAID Moldova Structural Reform Program supports us in the process of assessment of the issuance of the Special Transportation Permit and has armed us with valuable recommendations in this respect. We’ve also worked with this program in the construction authorization area and in other projects, and it’s been an efficient collaboration. I hope we get the same results this time,” said Svetlana Dogotaru, the state secretary at the Ministry of Economy and Infrastructure.

”This study will be used to harmonize our national laws to the laws of the European Union, where we aim to be. We are determined to improve our legal framework by optimizing the STP terms of issue and - not last - by overhauling the existing duties,” Igor Guja, ANTA’s interim director, concluded.

Apply for Summer 2020 Study of the U.S. Institutes programs

Nieman Foundation for Journalism at Harvard

Apply for funding! Being 20: Young Activists