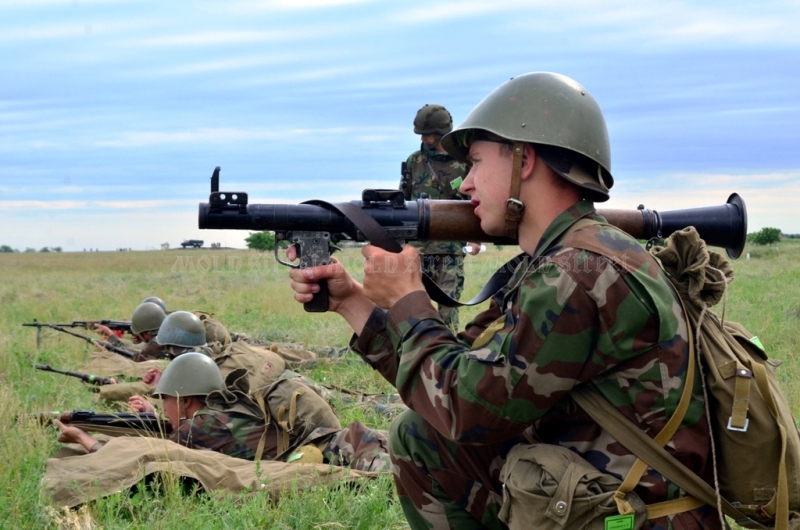 BNS
After a thorough review of the state of the armed forces in Moldova, the ruling Democratic Party (PDM) has decided to scrap the mandatory mature of the military service and upgrade it to professional.

Such a reform would claim at least 10 billion lei in costs and some experts are critical of this initiative.

PDM chairman Vlad Plahotniuc told journalists that the party asked in 2017 the Government to prepare a detailed study regarding the formation of professional armed forces and an action plan for this transformation.

"The conclusions of this assessment - which is a result of joint efforts of many ministries, agencies, and experts in the given area Concluziile evaluării respective - la care au lucrat mai multe ministere, agenții și experți în domeniu - confirmed the existing concerns: the conditions which the National Army provides currently for young recruits are not effective for a solida training and a decent living during the military service.

“At the same time, it happens too often that many young men pay off in order to escape the military service whilst enrollment is unavoidable for those who don’t have cash to walk by,” PDM said in a press release citing the party leader.

Mr. Plahotniuc has called for a reform phased within a two year time and asked the Government to reduce the number of new recruits starting next autumn.

Instead, he went on, the Government will hire professional military on contracts who will serve in the armed forces fully endowed and better trained. It will also solve out the issues related to logistics and remuneration in order to smooth the transition to a professional force.

The Defense Ministry on its official Facebook page supported the initiative and announced that some work has been completed in this regard. “The actions plan designed to build a modern, professional, and mission-ready institution is almost finished and will be tabled before the Government for approval,” the note reads.

The costs and risks

Neither the PDM nor Mr. Plahotniuc whispered a word about the costs of such a reform.

A former defense minister though, Vitalie Marinuța, who supports the initiative, may know some figures. He told the Publika TV channel that the country needed to increase the defense spending, up to minimum 1% of the GDP within the next five years, compared to only 0.35-.040% which Moldova spent in recent years on military affairs.

Mr. Marinuța, a US-schooled officer, cautioned over the cost assessment and terms of the army reform, reminding that a similar attempt in 2001 was buried before being prepared for its first public debate.

Moldova’s GDP in 2017 amounted to lightly more than 150 billion lei (some 9 billion US dollars). According to Finance Ministry reports, the defense spending that year hit around 569 million lei, or 4% more than the precedent year.

This is almost three times less than the former defense chief suggests.

On the other side, Colonel Andrei Covrig, former head of the General Staff, casts doubts over the need for this reform, warning that the country will run out of manpower is the event of war. He did not elaborate on this subject, but expressed concerns over the social burden for the state if the Government moves ahead with the initiative.

“Let’s assume we embrace as many as 4,000 professional soldiers. The question here is whether our state is capable of providing them a full social service pack. There’s no answer to this question. They will come with their families, spouses, children, and we have to think about all these circumstances,” the former head of the General Staff said.

Igor Munteanu, a former Moldovan ambassador to the US, who currently runs IDIS Viitorul – a respected think tank, has described the idea to get rid of the mandatory military service as a populist measure.

“I believe that the subject that is being discussed at this moment is pulled out of context; it is populist by nature. Many defense experts, civil society leaders, development partners might assure that a well trained and endowed army that is aligned to NATO standards would be more suitable to deal with the challenges it is designed for…

“Unfortunately Moldova does not belong to such a status; we don’t really have professional military who are well built, well equipped, well paid, and well trained in compliance with NATO requirements or requirements of other defense and security organizations. Since we don’t have anything of that, the reform would discredit the armed forces as an institution,” Mr. Munteanu told the Free Europe Radio.

On the other hand, the initiative contradicts the regional trends, he added.

“Look at what is going on in the region, where everybody has set on the military buildup track. Sweden reinstates its mandatory military service in January 2019, decided to open new bases, and begins educating its population in the spirit of mobilization and national solidarity; given that Russian troops are stationed in the Baltic region and Russian bombers fly nearby, Sweden feels threatened in spite of its neutral status or being a highly developed nation,” the expert stated.

In his opinion, the decision to discharge the young recruits from the armed forces under the presence of a foreign army on national territory is “a gesture of total absurd… [which] bares the absence of elementary savvy and lucrative ideas.”

In reply, Parliament Speaker Andrian Candu told a news conference that in the works on the initiative PDM took into consideration the experience of other countries, including Romania, which pursued a phased transformation approach before having a professional army in service.

“We want a professional army, well prepared and equipped, with modern weapons and well funded, which would become a security generator, not a money waster. We’ll provide our entire political support this such initiatives,” Mr. Candu assured.

Official statistics show that Moldova’s defense spending has been on the increase track in the past decade but never exceeded 0.4% of GDP. In 2010 for example, the defense budget was 236 million lei, in 2013 it increased up to 336 million lei, and in 2015 it amounted to around 460 million lei. In 2018 the military will receive 629 million lei from public coffers (0.4%), which is 10% more than last year. It would need another one billion lei in order to reach the threshold of 1% of GDP, or around 10 billion lei within the next four or five years.

Even if Moldova makes a financial effort to increase the defense spending to at least 1%, as suggested by the former defense minister, it still won’t make the country a military power. A published report issued by the Stockholm International Peace Research Institute says that Moldova’s expenditures for weapons are among the lowest in the world, both in terms of quantity and as a share of GDP.

In 2016 for example, Moldova spent on defense purposes twice less than Malta, a country that is 70 times smaller, and 11 fold less than Georgia, a country torn apart by secessionism and is comparable as territory and population with Moldova.

The austere budget of Moldova’s prevents new weapon acquisitions and its armed forces use mainly Soviet era machines and rifles at present, while the Defense Ministry is unable to cover even routine operations. The army modernization requires lots of resources and years of transformations – a mission impossible without extensive international assistance in logistical development, expert and manpower training, and supply of weapons and combat vehicles.