Moldova’s Debt for the Electricity Supplied by Romania Is For Sale: 7 Cents For One Dollar 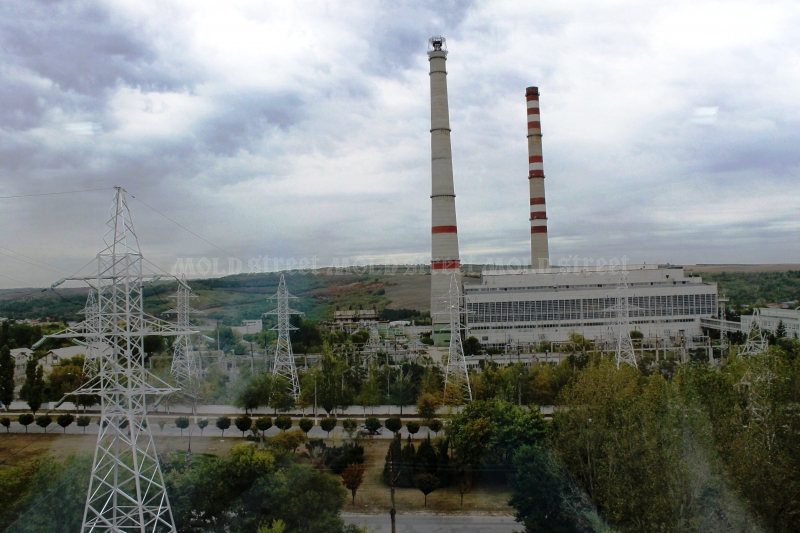 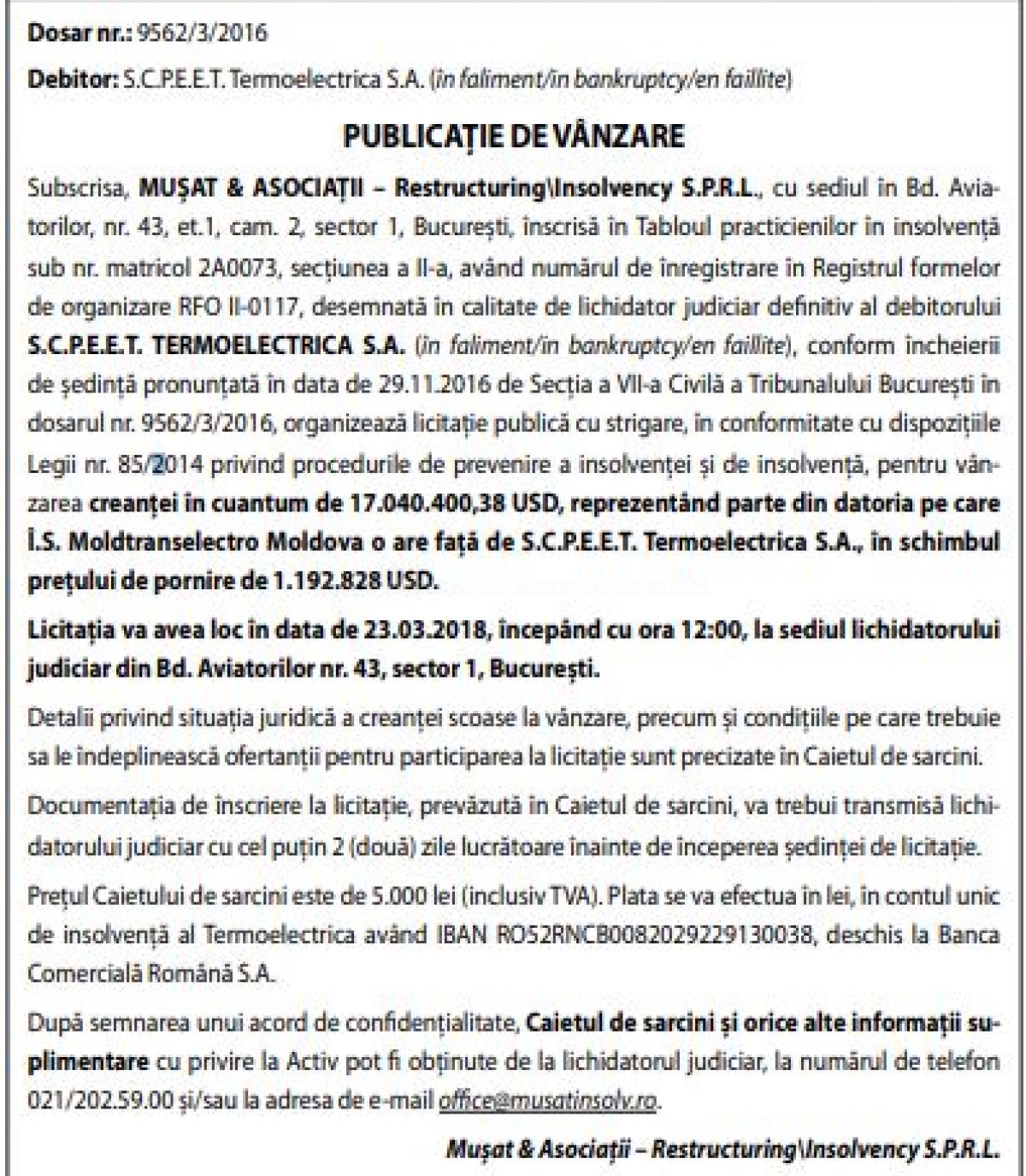 Copy of the notice for debt sale

BNS
A promissory note for 17.04 million dollars which Moldova owes to Romania for the electricity supplied 20 years ago was for sale at a public tender in Bucharest.

The debt rests with Moldova’s state-run company Moldtranselectro, which is short of cash to honor it. A law firm, Mușat & Asociații - Restructuring & Insolvency SPLR, is the official bankruptcy agent for Termoelectrica, Romania’s electricity provider that had to collect the money from Moldovans.

A price that is 14 fold lower

A published notice by Mușat & Asociații indicated March 23, 2018, as the day of tender, which was an English auction.

There’s nothing unusual with the tender, given that the debt has been for sale for four years already and the bankruptcy agency periodically invites bidders to claim the recovery rights. It is the price that catches attention at this promissory note: 1.19 million dollars for a debt of 17.04 million dollars, or 7 cents for one US dollar. This is 14 fold less than the original sum.

In despair, the Romanian agency has started publishing tender notices in the Republic of Moldova too. The 17 million dollars represents in fact a little bit more than half of the entire debt, which amounts to 32 million dollars. Moldova accrued it for the electricity its western neighbor had supplied in the period 1998-2001.

Another Romanian firm, Tital Total Group, dealt with the recovery of the remaining 15 million dollars. It also obtained a court enforcement order in Moldova in its effort to obtain the money from Moldtranselectro. Tital Total Group was issued the order after dozens of court sessions in Moldova during 2008-2016. In 2016 the firm filed for bankruptcy.

Romania rescued Moldovans from frost but Chisinau forgot to pay off

The story is this. Almost 20 years ago, in November 1998, the Moldovan Government asked the Romanian Government to furnish electric current and fill in the power deficit that incurred as a result of the Russia-controlled Cuciurgan Power Plant’s decision to halt supplies to the right bank of the Dniester. What started as an emergency operation continued until 2001.

The agreement was formally signed by Moldtranselectro company and Conel company, currently Termoelectrica. Under this document, Moldova had to pay off its debt by transmitting a state-owned oil importing and distributing company Tirex Petrol to the Romanian side, plus proceeds from the sale of power grids, coal, and other goods and services on Moldovan territory.

In reality, Moldova only paid less than 10% of its debt for Romanian electricity.

Through complex schemes, Tirex Petrol ended up in the portfolio of a German company, for another debt, while the proceeds from the sales of three power grids were used to fill in the widening budgetary deficit of Moldova.

On March 23, 2004, the Commercial Arbitration Court of the Romanian Chamber of Commerce and Industry ruled that Termoelectrica was entitled to claim 34.3 million dollars from Moldtranselectro. Although the Moldovan side never disputed that ruling, during a long period (2003-2009) only 2.8 million dollars from the debt was paid.

In earlier 2010 for example, the officially recognized debt stood at 32 million dollars, and included the interest commission. In April 2008, Termoelectrica sold the recovery rights for 15 million dollars to Titan Total Group, a private firm controlled by Romanian businessman Adrian Duman.

Termoelectrica said in 2011 that the very next month, in May 2008, it had asked a court to cancel the agreement with Titan Total Group, citing the latter’s failure to comply with its conditions, but the presiding judge turned down the request.

As a consequence, the Romanian firm filed for financial claims in Moldovan courts and battled in dozens of suits with the Moldovan Government. A number of courts awarded victory to Titan Total Group and issued enforcement orders for the Government.

From 15 down to 30 million dollars

As the time passed the financial claims of the Romanian firm increased too. In the last lawsuit in April 2016, the Moldovan Supreme Court of Justice rejected a ruling on revising another ruling from 2013. By that time, the amount which Titan Total Group expected soared from 15 million up to almost 30 million dollars – this amount included the interest arrears of 14.76 million.

In 2016 Titan Total Group filed for bankruptcy after its creditor Ebicom SRL, a firm in Bucharest, had claimed a promissory note of 699,000 Romanian lei (3.6 million Moldovan lei) in 2011.

According to Romanian website superrevizor.ro, the debtor contested the request for payment, invoking the fact that it had not accrued any arrears in taxes or wages, or other current financial obligations. Another argument was that Titan Total Group “was close” to recover more than 15 million dollars from the Moldovan state. “Not one official act proves that the company was close to get the money; instead its efforts had lasted for seven years in a row,” the Romanian news portal said.

Angela Morarencu, director-general at Moldtranselectro, declined to comment on the topic or the relationships with the Romanian company Titan Total Group.

Officials in the Moldovan Ministry of Economy and Infrastructure were earlier quoted as saying that the debt accrued from electricity supplies was an issue between two commercial entities and once one of them decided to sell off the recovery rights, this was undisputable. At the governmental level, neither the Moldovan side nor the Romanian side raised this issue for four or five years, even at the working meetings of the joint inter-governmental commission for economic cooperation.

The Moldovan Ministry of Economy and Infrastructure, too, refused to comment on this topic.

Given that the governments in Chisinau and Bucharest avoid this subject in the formal framework and neither side has proposed a solution, the multi-million promissory note is changing hands of slick boys looking for an extra profit.

Romania is currently the biggest bilateral creditor of Moldova. The latter’s failure to pay off a debt for strategic commodities supplied 20 years ago portrays the ex-Soviet republic as an unserious trade partner and erodes its financial credibility.