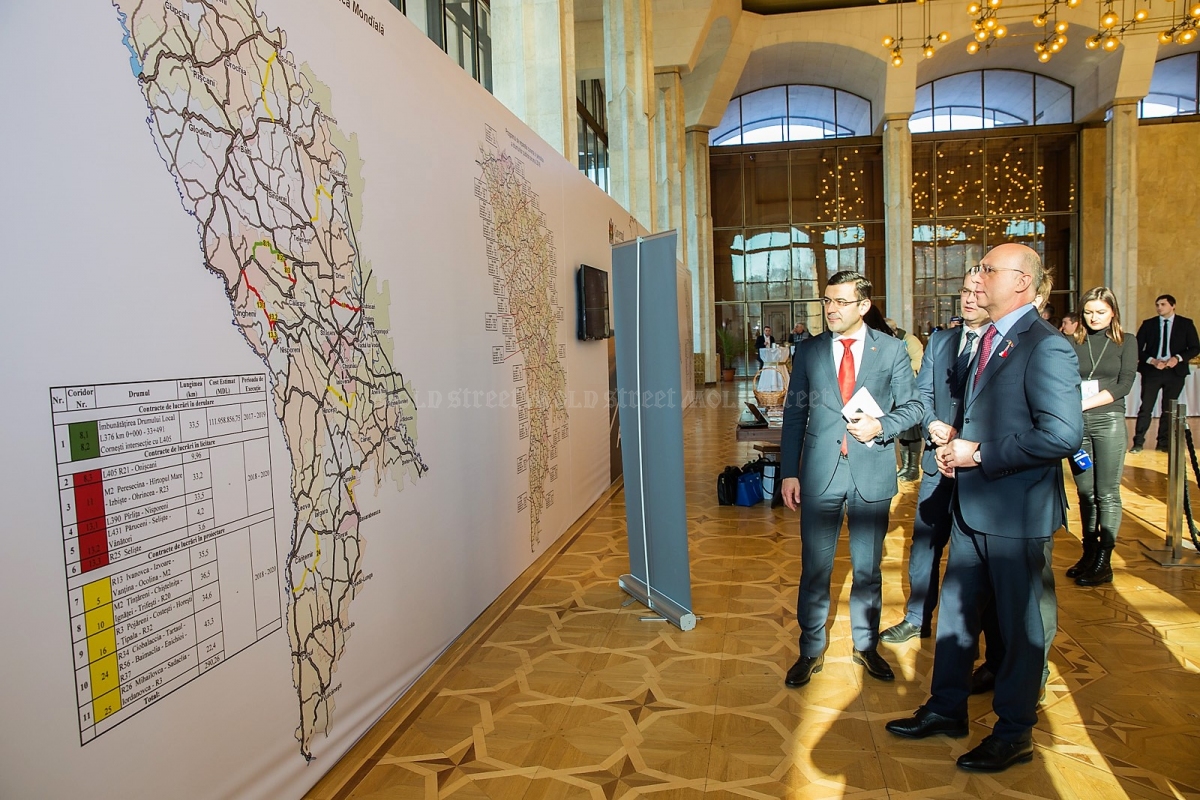 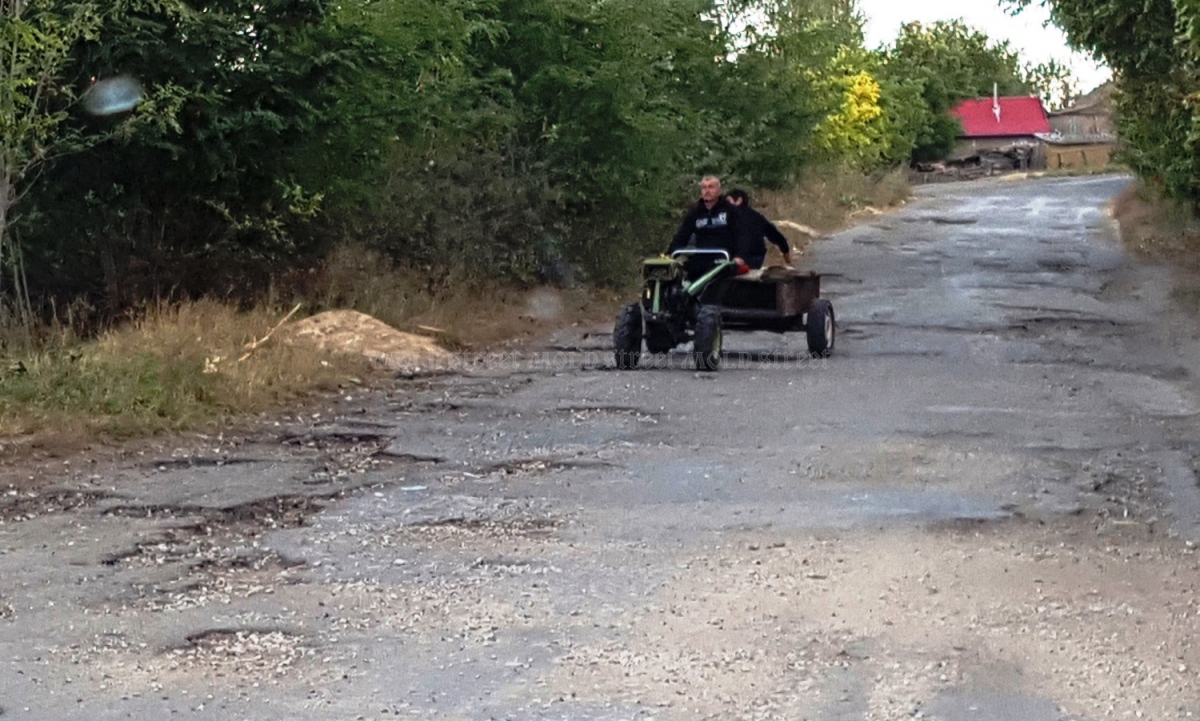 Most local roads in Moldova looks like this one

BNS
The Moldovan Government has found the necessary money for implementation of an initiative of millionaire Vlad Plahotniuc - "Good roads for Moldova", which provides for construction and repair of more than 1,200 kilometers of roads across the country in 2018.

In fact, this money was earmarked already for this purpose in the national budget for 2018.

Mr. Plahotniuc, a controversial oligarch who controls the ruling Democratic Party (PDM) with an iron hand, says the project covers all communities irrespective of their political color. “At the [PDM] meeting we have analyzed which is the best way to support our Government and picked up a project that has all necessary resources to complete. Our final goal is to offer a new potential for growth in Moldova: good roads will help us modernize the countryside,” the Democratic leader said on February 27.

Two days later, at a special session that debated the oligarch’s initiative, the cabinet of ministers showed a group of mayors and district chairmen the portions of roads and streets that were included in the reconstruction and repairs program for this year.

“We shall put aside the resources that are necessary for construction and repairs of more than 1,200 kilometers of roads in rural areas. We have the ambition to complete this year by leaving behind the largest knitting of rural roads ever built in Moldova,” Prime Minister Pavel Filip at that meeting.

Economy Minister Chiril Gaburici said in turn that the road rehabilitation initiative was one of the seven priorities of the Moldovan government in 2018 and it was “just a first step.”

The program "Good roads for Moldova" sets out for the rehabilitation of around 1,200 kilometers of rural and regional roads that lie through 1,200 towns and villages. The total committed investments amounts to around 1.6 billion lei; of this 500 million will be taken from the Road Fund and 1.1 billion from the State Budget.

According to the Economy Ministry’s plan, there will be one single tender for each district to identify the contractors. Each contractor will be responsible for one administrative-territorial unit. The contracts are expected to get signed in May.

Where the money came from

At a closer look though, this super project which Mr. Plahotniuc presented as his is a banal distribution of funds from the 2018 State Budget; Minister Gaburici himself had announced it earlier.

A week before Mr. Plahotniuc’s presentation, Mr. Gaburici in a response to the no-confidence motion which the Socialist faction demanded in the Parliament said that the Government was planning to spend over 972 million lei for maintenance and repairs of public roads in 2018.

"For this year we generally plan to carry out activities designed to improve the road infrastructure within some 340 settlements, and for [for this purpose] as much as 500 million will be disbursed from the Road Fund for repairs of 280 kilometers.

The remaining amount – 472 million – will be spent for maintenance services on 5,900 kilometers,” the minister stated.

Another 1.1 billion lei from the State budget will be used to reconstruct about 890 kilometers of local and communal public roads, as well as streets, Mr. Gaburici added.

A simple calculation shows that the money for all these services had been earmarked in the State Budget and that the ruling Democratic Part only decided how to spend it; normally such a decision must be issued by the Government in agreement with the local public authorities. 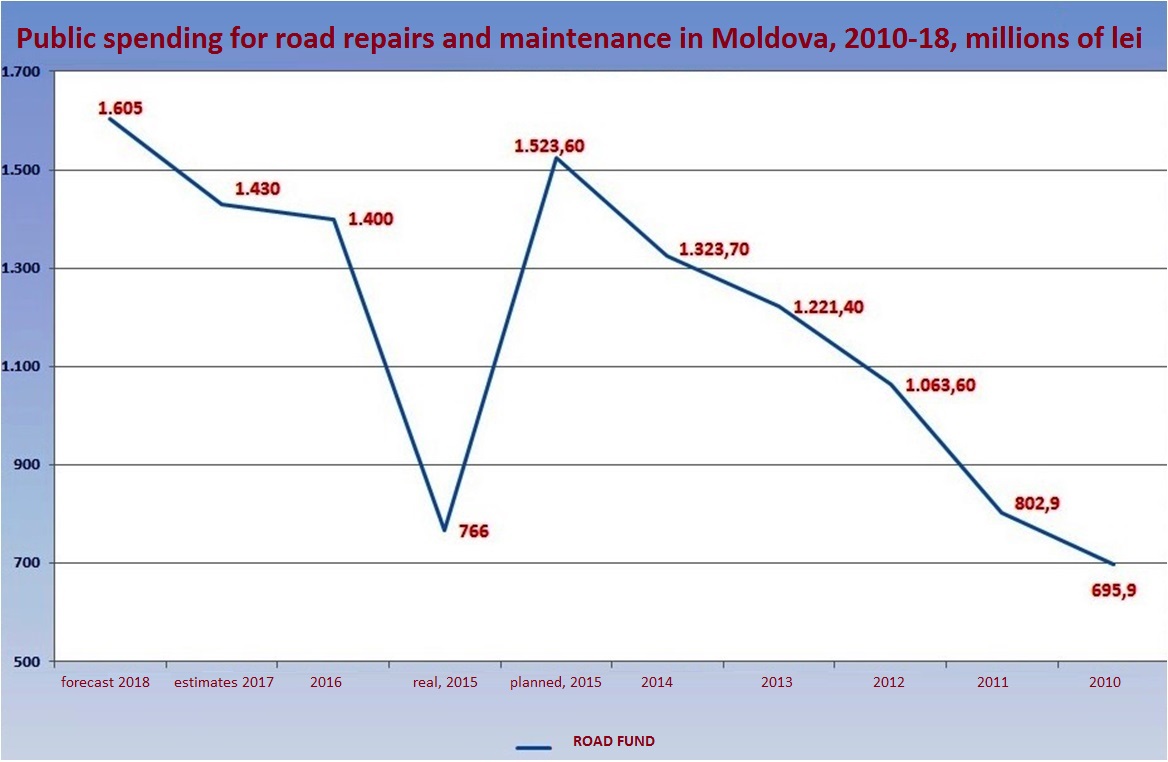 Source: BNS calculations based on the reports of the Finance Ministry and Economy Ministry

Official figures show that in 2018 Moldova might spend a record amount for the past decade for roads; nonetheless, converted in U.S. dollars, this sum is still below the expenditure in 2014. There’s more: in recent years the Government had planned ever larger expenses for roads but failed in all major project due to faulty planning and bad management.

In 2017 the Government literally obliged the mayoralties to sign up for administration of local roads – some of which existed on paper only – and the central authorities thus got rid de jure of their responsibility for the local infrastructure. The local authorities were warned that otherwise they would not receive any funds for roads within their jurisdiction.

Later the Economy Ministry released an analytical paper where it admitted that the distribution of funds for roads had been defective and unfair. Among the faults it cited 1) delayed formal approval of the program (june 20, 2017) and consequent reduction of the implementation period; 2) devolution of the local roads infrastructure to the local public authorities; 3) functional re-structuring of roads, alias the formation of regional roads; 4) cancellation of the tender for development of software for vignette collection from motorists (the bids were all disqualified); 5) cancellation of the tenders for road repair services because of the lack of sufficient bids.

Many roads as a consequence have remained in bad condition.

Speaking of the sum for the project "Good Roads for Moldova", it is just a bit larger than the sum allocated for the same purpose in 2017. One conclusion is that the Democrats’ 2018 initiative is an electoral trick rather than a project to improve somehow the disastrous state of Moldovan roads.

Not last to be said, at the end of 2017, former Economy Minister Octavian Calmâc, now advisor to the prime minister, promised the road building industry that next year "Moldova would be transformed into a genuine building site and the state will spend some five billion lei for the road rehabilitation program."

The bulk of funds comes from the international partners however. The National Budget Law reads that the country will implement two road construction projects with financial coverage from international sources:

In other words, the international partners contributed one billion lei more for the roads infrastructure rehabilitation in Moldova and the Government of this country committed itself to. It is true that the Government periodically praised its own efforts in past projects with international funding in recent years and another truth is that many of those projects have not completed yet.

An overwhelming part of roads in Moldova are in bad or very bad condition; the country has been for decades among the countries with the worst road infrastructure.