Economic Dependence on Russia. What has Moldova Learnt? 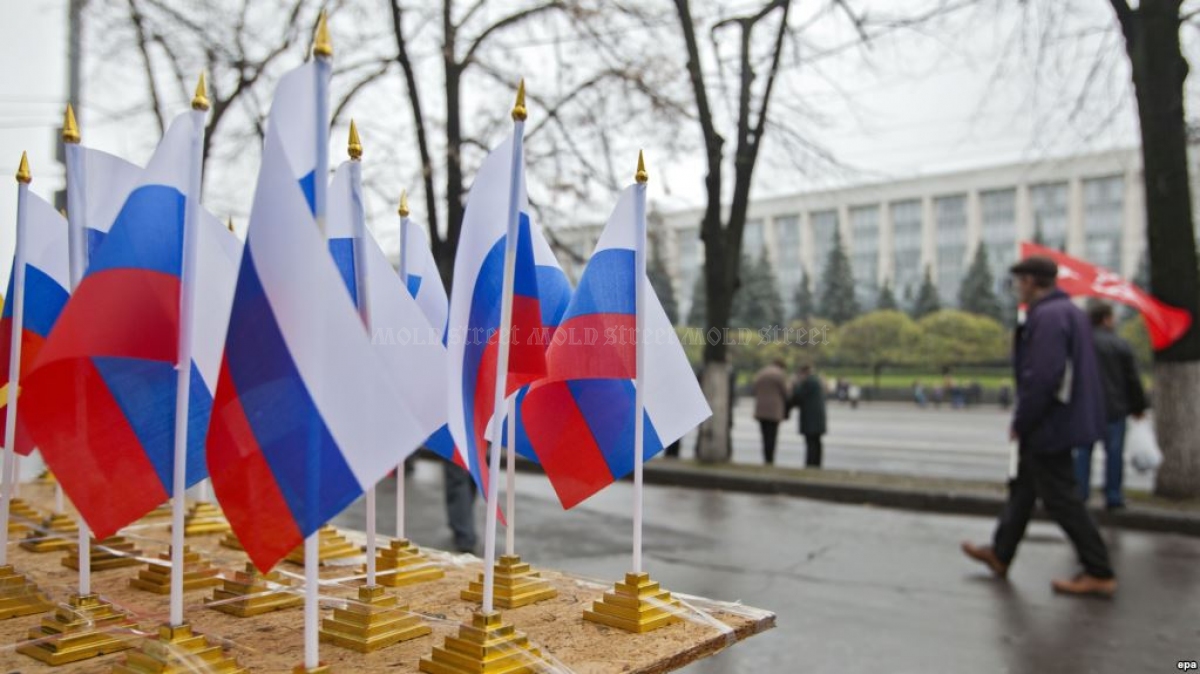 BNS
Relationships between the Republic of Moldova and the Russian Federation have always been complicated since independence was proclaimed and there is an important factor beneath them: the first always depended on the second from the economic point of view.

During the past year the Moldovan-Russian relationships were marked by a dualism in which President Igor Dodon flirted with the Russian leader at official meetings while the Moldovan Parliament and Government fired tough criticism at Russian authorities. The frictions have reached new heights after Chisinau accused Moscow of harassing Moldovan officials and Speaker Andrian Candu warned that Moldova could claim reparations of billions for the military occupation of the Transnistrian region. The Kremlin on the other hand is irritated of the new Moldovan legislation on combating (Russian) propaganda.

Moscow however never hesitated to show the leadership in Chisinau that it would use any kind of pressure when it doesn’t like Moldovans’ decisions. There are plenty of examples in this regard and the most notorious sanctions for “insubordination” are the wine embargos (2006, 2013), fresh produce embargo (2014), unilateral customs tariffs (2014), and threats to make the lives of Moldovan migrant workers in Russia tougher.

Mold-Street decided to analyze just how much Moldova depends on Russia from the economic point of view. For this, we scrutinize three major aspects in the bilateral economic ties: 1) Russian investments in Moldova, 2) bilateral trade, and 3) remittances.

In spite of a number of reports a few months ago that Russian capital was running away from Moldova, Russia has always been the main foreign investor and remains as such even today. This conclusion derives from the figures provided by the database of the Coordinated Direct Investment Survey (CDIS) of the International Monetary Fund (IMF). At the end of 2016 Russian investments in Moldova amounted to 716 million dollars, without the secessionist region. 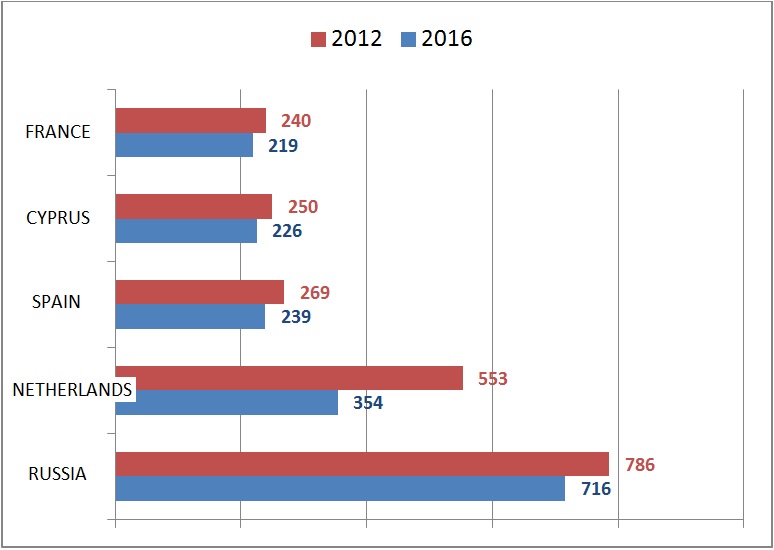 At the same time, the National Bank of Moldova suggests that the Russian capital is present in Moldova mainly as debt instruments, rather than company shares or participations in investment funds. 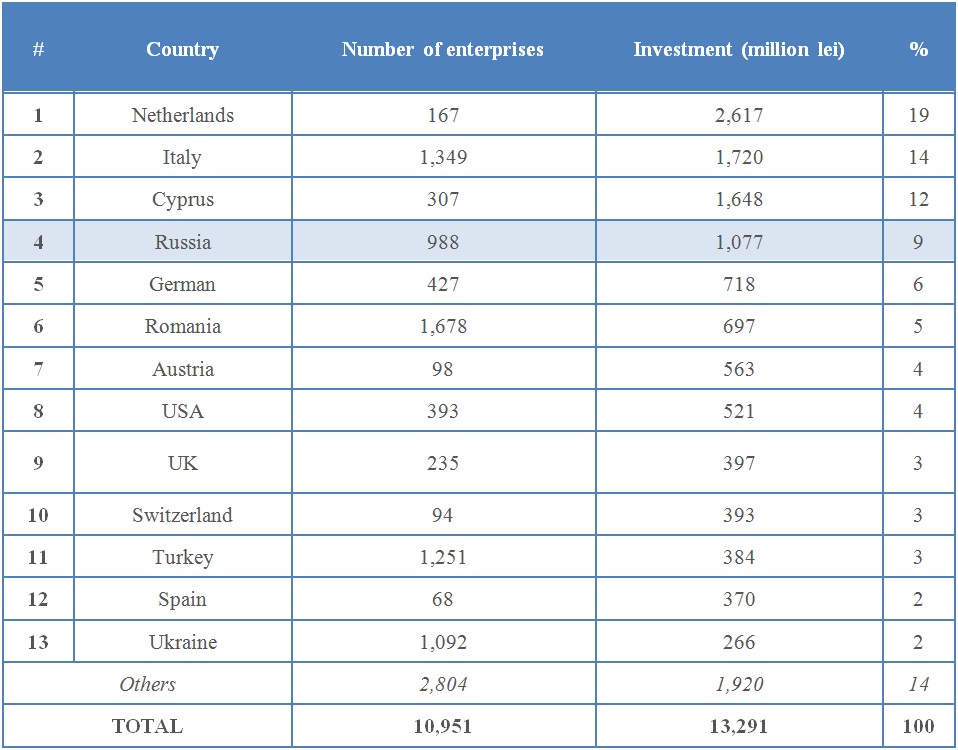 More than 400 Russian capital enterprises in Moldova in ten years

Avia Invest is certainly by far the most notorious Russian venture in Moldova over the past few years. It was founded on August, 2, 2013, being shared equally by the Khabarovsk Airport and Kolomensky Plant, two joint-stock companies in Russia. Avia Invest is running the Chisinau International Airport on concession conditions, for a period of 49 years; its investment commitment is 244.2 million euros.

An investigation by RISE Moldova, however, reveals that the company changed proprietors several times ever since. In the latest episode of the kind, Komaksavia – a Moscow-based limited liability, sold its share of 95% in Avia Invest to Komaksavia Airport Invest, a limited liability in Cyprus. The only shareholder that directly reminds of Russia – the Khabarovsk Airport – controls only 5% of the capital. There is a collection impression in Moldova that the concession of the Chisinau International Airport is an interface rather than investment and that the true beneficiaries have roots in Moldova. 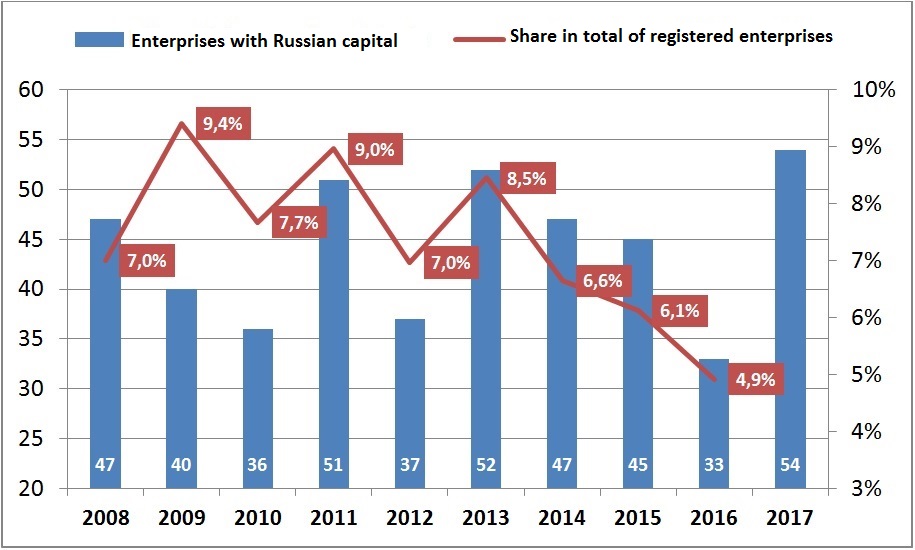 Generally speaking Russian capital is present in all sectors of Moldovan economy - from natural gases and oil commodities, to telecommunications, banks, media, and down to the food processing industry and online payment terminals.

Russian-owned enterprises also are the heavyweights in terms of concentration and turnover - Gazprom in MoldovaGaz, Inter RAO EES in the Cuciurgan power station, and Lukoil. However, if we count the country of origin of investments, the British Virgin Isles emerges as the primary source.

In the financial sector, ComertBank is the largest presence of Russian capital, followed by some presence in EnergBank and Moldova-Agroindbank.

By the way, in the financial sector a company formally owned by Russian national Igor Benz - but de facto controlled by controversial Moldovan-Ukrainian millionaire Veaceslav Platon - triggered litigation against the Moldovan Government in the Arbitration Institute of the Stockhold Chamber of Commerce. This is the main reason why 40% of shares in Moldova-Agroindbank may not be traded.

To be more precise, it is a complaint from Evrobalt LLC against the Moldovan Government regarding the alleged violation of the Moldovan-Russian Agreement on Mutual Protection of Investment, which was signed in March 1998.

Evrobalt LLC claimed that it had invested into the purchase of a 4.5% share in Moldova-Agroindbank (MAIB), with the approval of the central bank, but the latter found that Evrobalt LLC had acted concertedly with other shareholders in order to gain control over the bank. As a result, Evrobalt LLC has seen its rights and properties frozen and then it was obliged to sell off its shares in MAIB within three months.

FOREIGN TRADE: How embargos reduced from dependence upon Russia

The trade embargos and customs duties which the Russian Federation imposed in 2013 and 2014 reduced from the share of Moldovan products in the Russian market. If in 2012 on average 3 out of 10 dollars came from exports to Russia, in 2017 one 10% of exports were absorbed by Russia (254.4 million US dollars).

Fruit and nuts are the largest group of produce exported to Russia, though their price reduced 2.3 fold during 2012-2016. In 2012 Russia received almost half of these produce while in 2016 only 25%.

Moldovan apples have remained the commodity most dependent upon the Russian market. In 2016 more than 89% of exports of apples, pears, and quince landed in the Russian market. On the other hand, compared with year 2012, trade reports for 2016 show that the dependence of Moldovan exports of table grapes, plums, apricots, and sweet cherries is somehow lower.

Pharmaceutical products rank second in the list of goods shipped to Russia, but readers should keep in mind that the largest part of pharmaceuticals are classic re-exports (92% in 2016), therefore their added value for Moldovan economy is minor. Another point is that re-exports accounted for 44% of total Moldovan exports to Russia in 2016.

Apples, soap, rubber, and meat – most dependent on Russian market

The exports of spirits and wines suffered the worst blow – 5.4 fold less in 2016 compared with 2012, from a share of 28.7% down to just 6.6%. Meat and organ exports dropped three fold over the same period. Aside from apples, other products with sales dependent on Russian consumers in 2016 were soaps, detergents, and washing substances, which accounted for 97.6% of exports. Rubber and rubber-made items followed (81.5%), while meat and eatable organs were next (84.7%).

It’s also worth mentioning that the curtailment in Moldovan exports to Russia isn’t just a consequence of embargos or customs duties, but also a result of the worsening economic status of Russia and declining trade between the two countries.

For example, if in 2012 Russia imported apples, pears, and quince worth 1.24 billion dollars from Moldova, in 2016 it bought more than twice as less: 524 million dollars. 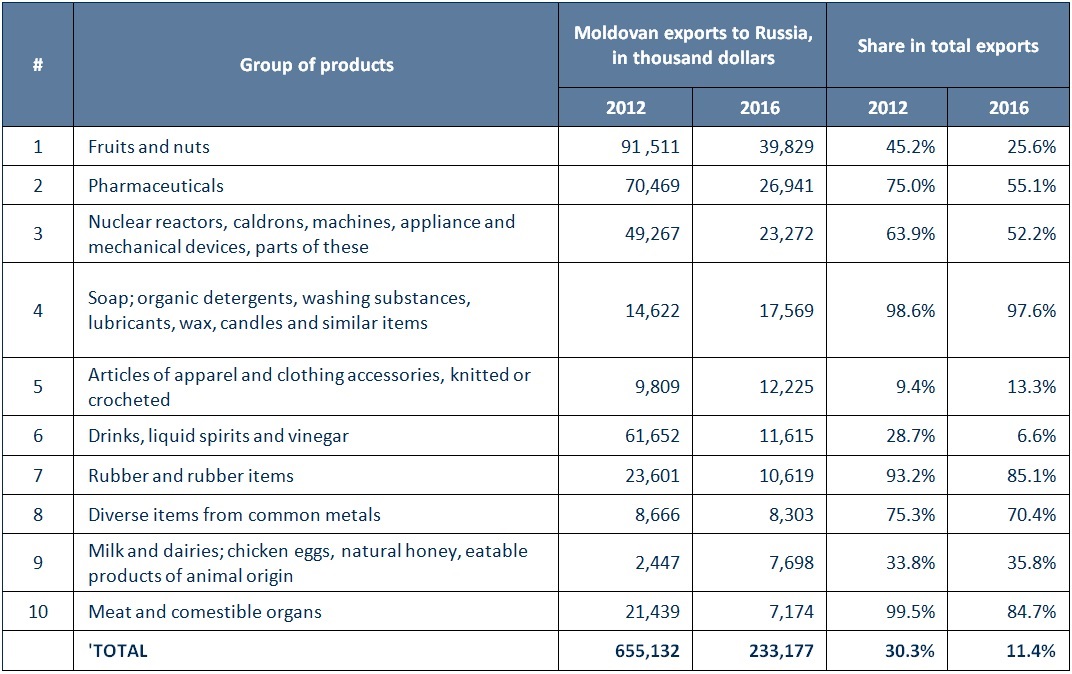 The cold wind in Moldova-Russia relationships in the past few years not only downsized the Moldovan exports to Russia but also Russian exports to Moldova: from 15.7% in 2012 to 11.8% in 2017. Analyzing the top ten categories of products which Russia sells in Moldova we can see that the natural gases remain the Achilles Heel for the smaller country.

Mineral fuels are on the second position in the list of best selling Russian products in Moldova and account for one fifth of all exports to the tiny republic. Fertilizers were on the growing trend and accounted for around 80% of all imports from Russia. Other Russian commodities exported to Moldova are food preparations, nuclear reactors, caldrons, hardware and machines, appliances and mechanical devices, and parts for these items. 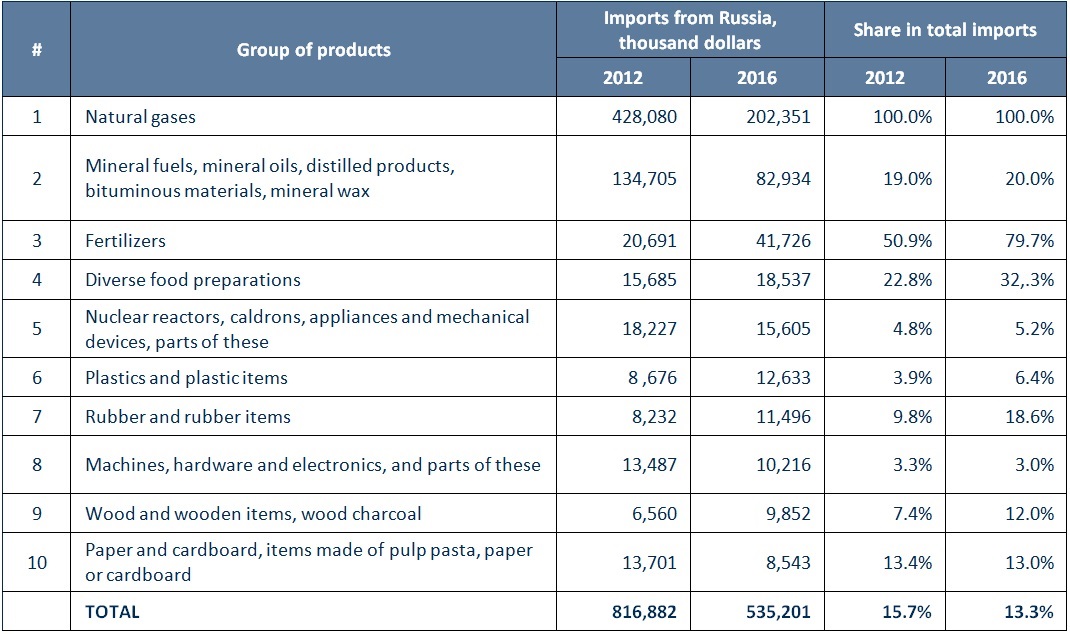 The subject about the presence of Moldovan migrant workers in Russia has been systematically used by the Krelmin as an instrument of pressure on Chisinau and within internal political fighting. In spite of these circumstances the two countries have not signed an elementary agreement for social security for Russians who work in Moldova and Moldovans who work in Russia, ever since the Soviet Union broke up 26 years ago.

It’s hard to count the exact number of Moldovans working temporarily in Russia, but it’s certain that the trend is on the decline, if to believe Russian statistical reports.

According to the Institute for Social Analyses and Forecast of the Presidential Academy for Economics and Public Administration, a Russian state-owned academic institution, the number of Moldovan nationals who lived and worked in the Russian Federation as of late December 2016 stood at more than 489,600. That was 71,000 less than in early 2015. It must be said that a part of these workers were already permanent residents of Russia, therefore the number of seasonable workers should be lower.

Remittances from Russia – from one billion down to 400 million

Remittances from Russia have always been large compared to the earnings Moldovans were sending from other countries. Russia accounted for more than 60% of all remittances for years and in 2012 this number almost halved from 65.6% down to 33.6% in 2017. In absolute figures, remittances in 2013 passed over one billion dollars and in 2017 they passed a little over 400 million dollars.

This dramatic decrease happened on the background of the worsening economic situation in Russia and severing work conditions for foreign migrants.

Then the depreciation of the rouble hit the incomes of Moldovan migrants in Russia where they were paid in Russian currency. Not last – many Moldovans headed towards other, more attractive destinations.

Even so, the expose of Moldova to the migration channel is still high. 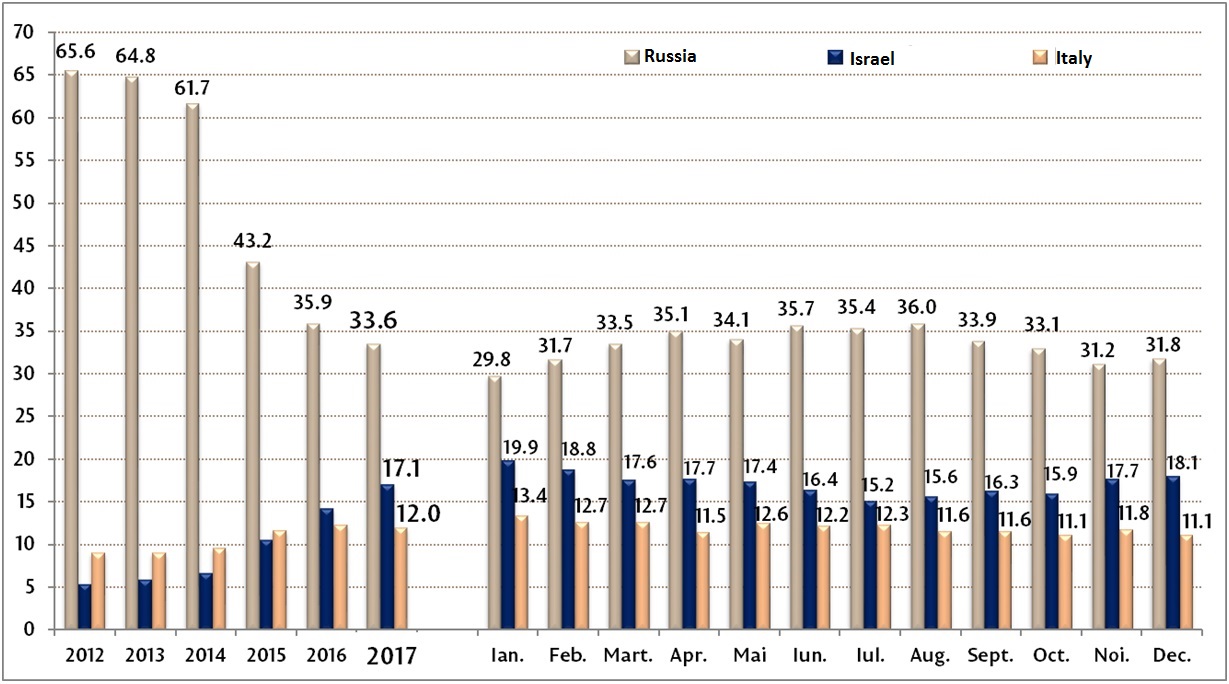 In conclusion, although there are still many vulnerabilities, the economic dependence upon Russia has declined visibly in the past years. It may sound ironically, but namely the punitive measures which the Kremlin periodically imposed played the main role in this evolution.

If the Moldovan authorities made good progress in such projects as construction of the Ungheni-Chișinău gas pipeline, Moscow would lose even more levers of influence on Moldova.

Anyway, Russia’s lessons of economic suppression – if they are learnt well – are painful for a short period only, or at least in the medium term. Just look at the Moldovan wine-making sector, where more than 60 exporters are busy shipping wines to various destinations at present. After bankruptcies in chain in this sector, survivors focused on quality and are able to sell today their products in more than 50 countries.