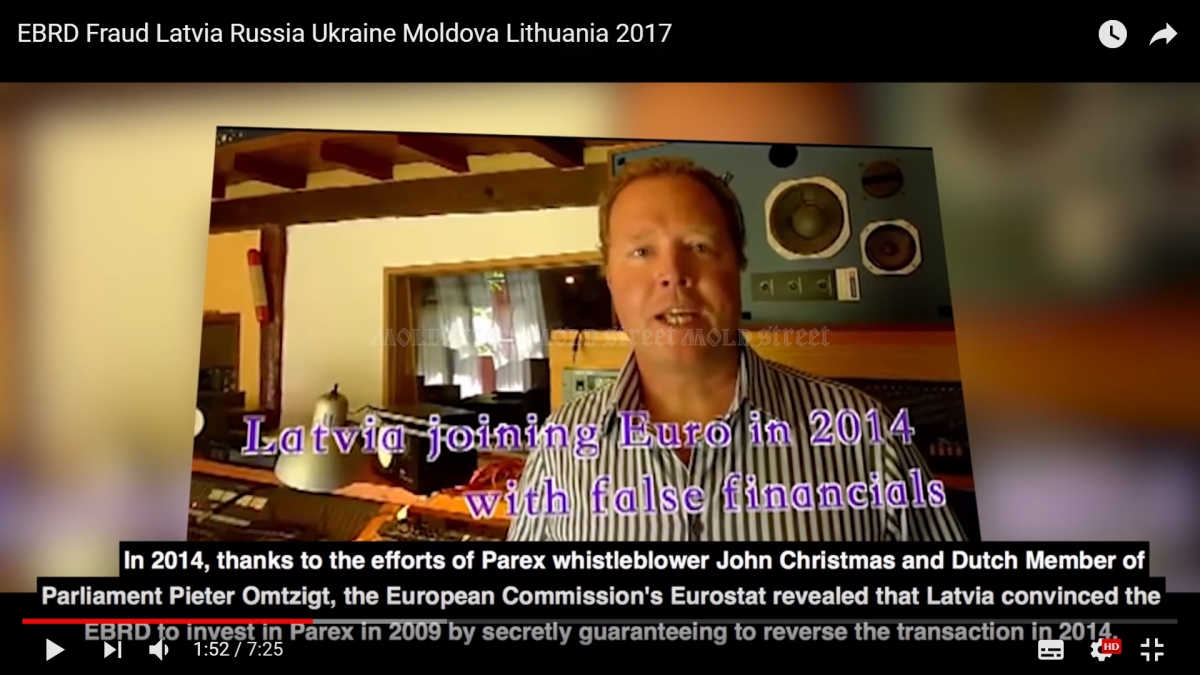 John Christmas, exiled whistleblower from the Latvian Proxy Network
A group of activists, including myself, who are interested in Latvia, Moldova, Ukraine, and Russia, have produced a new video with evidence that the European Bank for Reconstruction and Development (EBRD) organized a large bank fraud.

This is a syndicated article.

We have been making videos since 2011 to pressure the EBRD to admit knowledge of this evidence, but so far the EBRD has remained silent as the problem grows. The EBRD is funded by the governments of 65 countries to invest in 30 countries. According to the EBRD website, it has a mission to foster transparency and it responds to whistleblowers. Unfortunately from our experience, the EBRD is not fostering transparency and does not respond to whistleblowers.

The evidence was explained in my article 'A Preventable Financial Disaster' (https://www.mold-street.com/?go=news&n=3929) published by Mold-Street on 7 July 2015, and here is an updated summary.

The Latvian government nationalized Parex Bank in 2008 and gave it a huge bailout loan, even though the bank always reported profits.  The EBRD announced the purchase of Parex shares from the Latvian government in 2009. That announcement is still on the EBRD website so presumably it is truthful. However it was strange because the EBRD was supposed to be fostering transparency however Parex was a specialist in offshore services for Russia and Ukraine, and has been named as money launderer for the Tambovskaya Mafia by a Spanish court.

Then, in 2010, Latvia announced that half of the assets of Parex were bad.  This implied that Parex was a fraud (its profits were fake and many of its loans were fake), the shares purchased by the EBRD were worthless, and most of the bailout loan from Latvia to Parex would not be repaid. The Latvian government blamed the United States and Sweden for this and sent one anti-corruption protestor to prison. However leaked information shows the real problem was insider loans to people linked with Russia.

For a while it wasn't clear what the EBRD was doing since its agreement with the Latvian government was opaque, which is again strange since the EBRD mission is fostering transparency. However, in 2014, the European Commission's Eurostat (thanks to our efforts) wrote a letter confirming that the 2009 privatization was secretly guaranteed.

The Latvian prime minister finally admitted that the privatization would be reversed at an undisclosed profit to the EBRD. The Latvian government had co-conspired with the EBRD to use taxpayer money to cover-up a bank fraud thus protecting bankers and auditors who could have been prosecuted. The overall result for Latvia was that the government debt doubled and then tripled.  And also over 20% of the population left the country.

Now in 2017, the same bankers and auditors can be found at Citadele Bank and ABLV Bank. These banks, with obvious government protection, are still focussed on offshore services for Russia and Ukraine. ABLV is active in Moldova as well. Kroll named ABLV Bank in connection with the disappearance of a billion dollars from Moldovan banks.

We will distribute the EBRD evidence to interested people, including EBRD staff, in Eastern Europe, the European Union, and the United States.  We will continue distributing until we get a response from the EBRD. We will also demand a full list of all similar 'investments' (where a government paid the EBRD to pretend to invest) made since the EBRD was created in 1991 throughout all of the countries where it operates.

Today the EBRD supposedly owns stakes in banks including Citadele Bank (Latvia), Raiffeisen Bank Aval (Ukraine), Belinvestbank (Belarus), Siauliu Bank (Lithuania), and Victoriabank (Moldova). Are these investments real? Or is the EBRD motivated by secret guarantees to be paid by unknowing taxpayers who are being duped by their own governments?