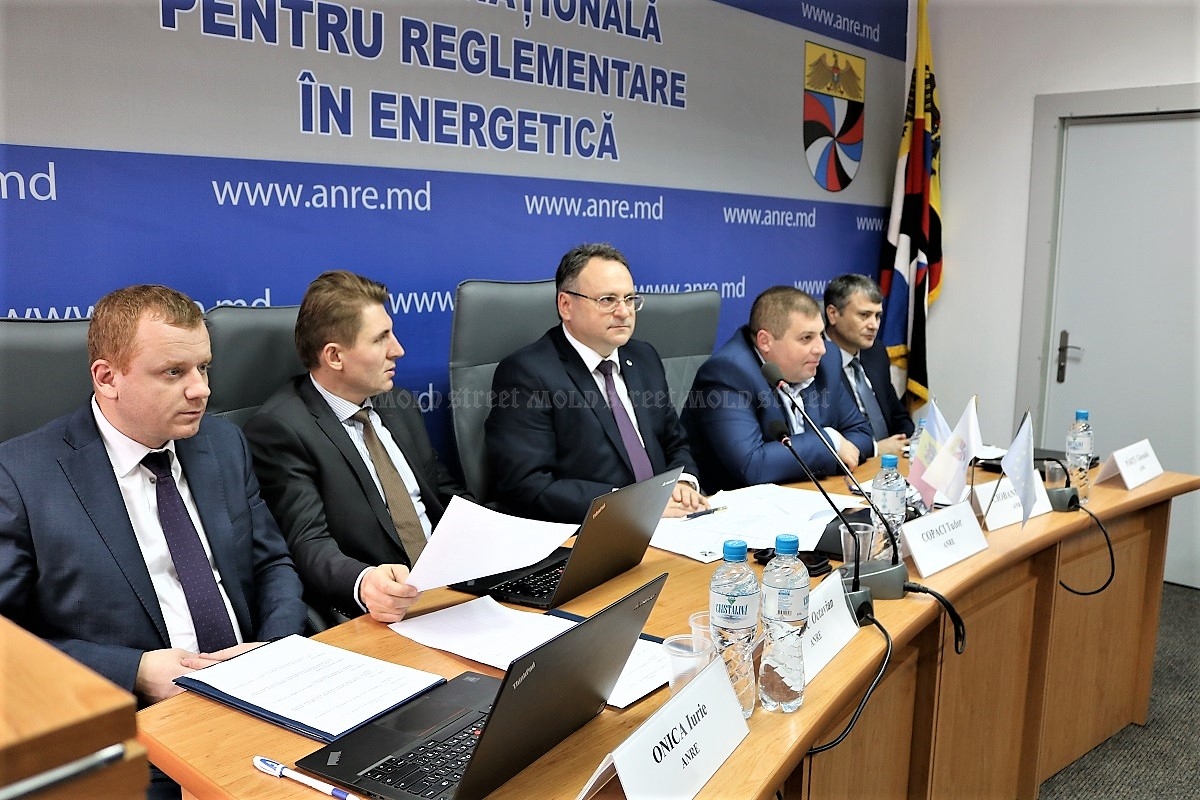 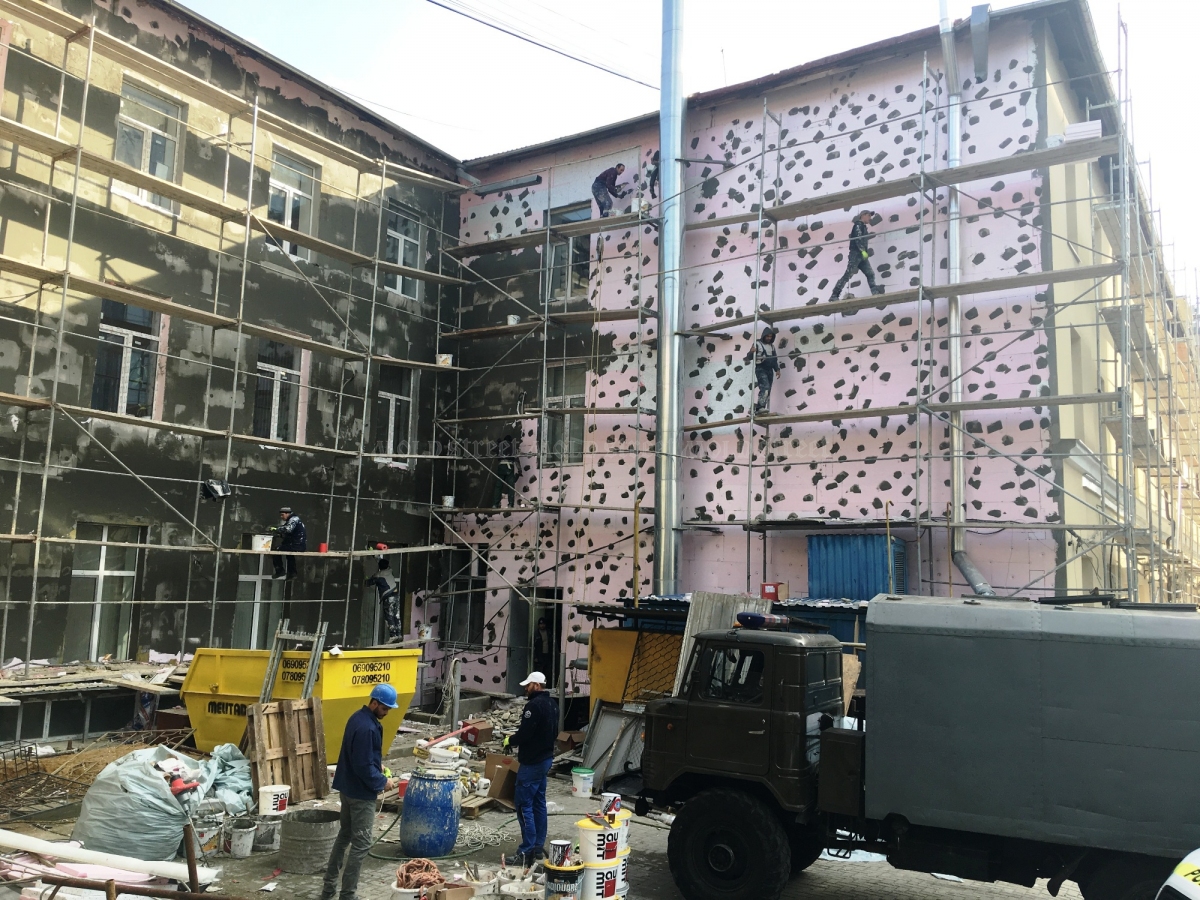 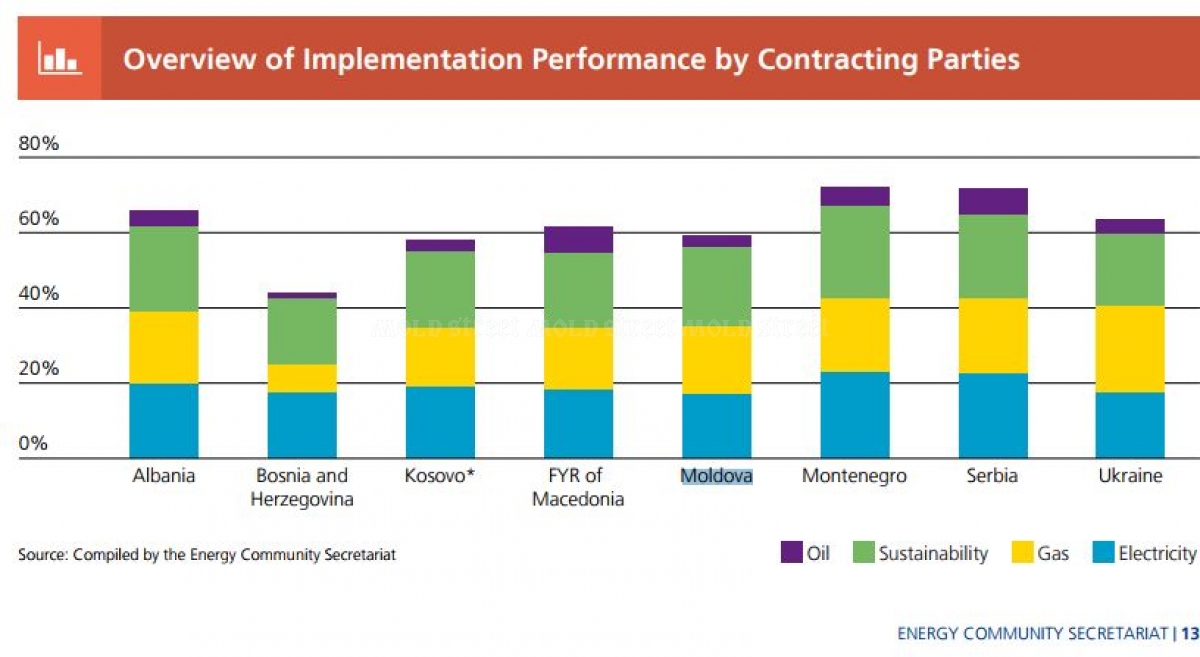 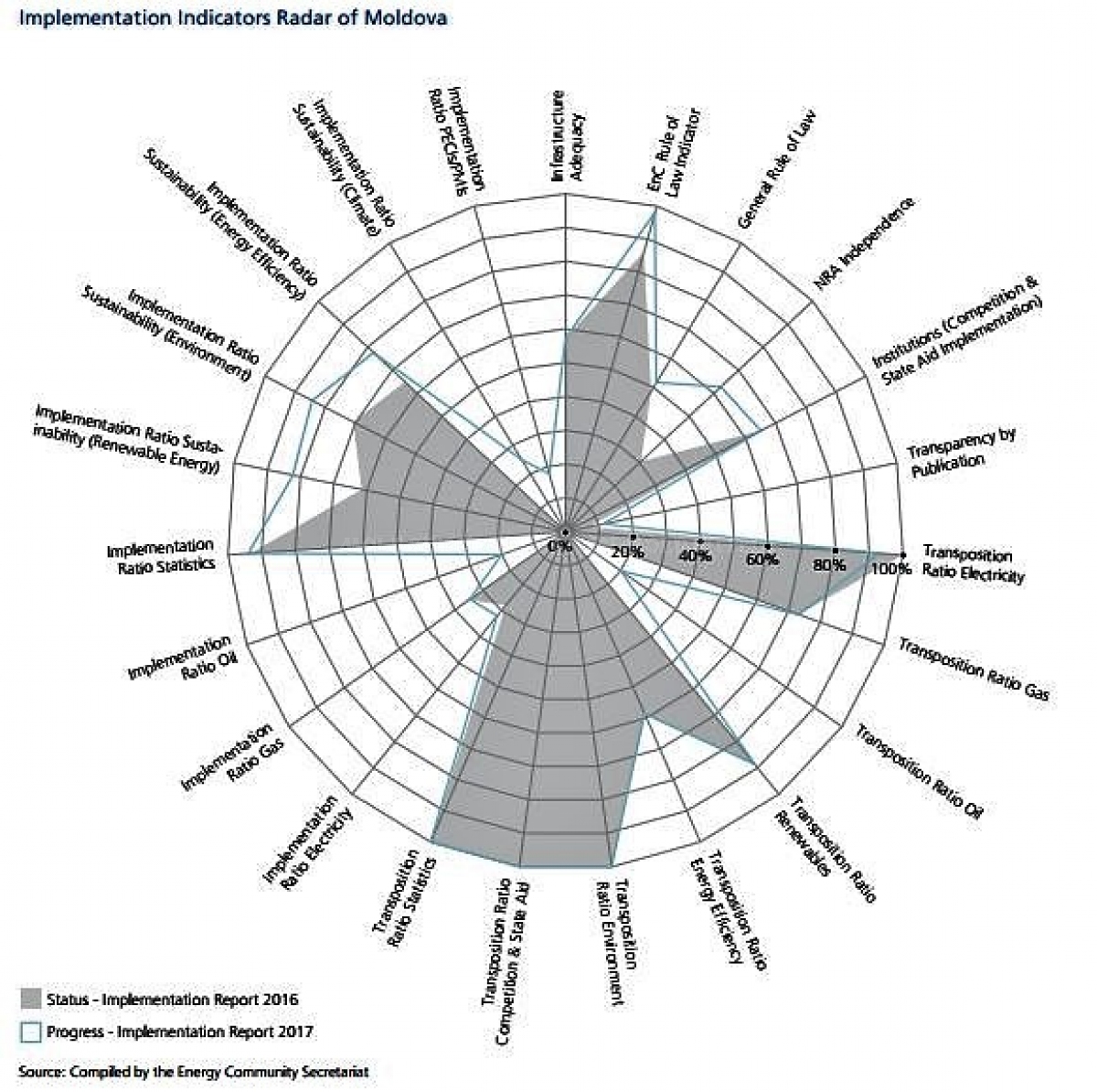 BNS
The mission from the International Monetary Fund has departed home and the Moldovan government has breathed relieved full chest – it succeeded to avoid the worst scenario that would freeze the IMF’s assistance program for the ex-Soviet state.

Those who cheer this success say it didn’t matter how the Fund had been persuaded. But other international institutions and companies point to serious problems in many sectors and to the fact that the reforms have been mimicked.

This is the case of the energy sector in principal and concerns such issues as renewable resources, energy efficiency, climate change, natural gases. The European Energy Community has stated that in spite of minor progress in the way of compliance to the EU energy acquis, Moldova has been struggling with major challenges as regards the adjustment and upgrading of its laws.

Moldova failing to comply with the EU Directives

Take for example October 27, 2017, when the Energy Community Secretariat issued a note that notified the Government in Chisinau about a case coded ECS-14/16 against Moldova. In its assessment, the Secretariat found that Moldova had not transposed into life or improperly transposed the relevant provisions of its Directive 2010/31/CE regarding the energy efficiency in buildings.

“The purpose of this initial step in the procedure is to give Moldova the possibility to react to the allegation of non-compliance with Energy Community law, and enabling the Secretariat to establish the full factual and legal background of the case. According to Articles 7 and 17 of the Rules of Procedure for Dispute Settlement, interested parties may be granted access to the case file and may submit written observations on the present case to the Secretariat during the preliminary procedure,” it said in a press release.

Similar cases had been filed against Moldova in the past and the authorities were compelled to comply with their obligations.

The note reveals just a small portion of problems in the energy sector. A report which the Energy Community has released outlines the real progress which the country achieved in the process of integration within the European energy market. Moldova ranks the last but one place among eight countries in the region that are moving towards the energy integration with the European Union.

The adoption of the Electricity Law in May 2016 is viewed as a positive step; it transposes the EU’s Third Energy Package and serves as a scene-setter for adoption of a new implementation legislation and new regulations in the sector.

The progress achieved in 2016 is overshadowed though by a new litigation with the largest and solely private power distribution operator, Gas Natural Fenosa, because of the change of the tariff methodology by ANRE, Moldova’s energy regulator, the Secretariat stated.

Readers should bear in mind that ANRE adjusted the tariffs for electricity distribution in March 2017, based on a new tariff calculation methodology it approved in February 2017. Independent experts say that the new methodology harms the operator’s ability to recover the losses in the network, increases the country risk that is used to calculate the investment costs, and shortens the lifespan of assets.

ANRE director Tudor Copaci has admitted that a litigation is being in progress with Gas Natural Fenosa but he denied that the new methodology could be blamed for the operator’s financial problems.

"The changes took place in compliance with the new Electricity Law. It obliges us to adjust the regulations in the energy sector to the law within 24 months after its entry into force," the regulator’s head stated. ANRE also referred to Article 96 from the same law, which reads that “The methodology for calculation of prices and tariffs that are regulated at the moment of enactment of the law can be revised by the Agency.”

Gas Natural Fenosa (GNF) meanwhile sees no relation between the obligation to implement the Third Energy Package and the modification of the methodology, pointing out that the changes affect specific parameters in the electricity tariff rather than improves the methodology itself.

“The specific tariff parameters that have been changed in an unjustified manner are as follow: the recognized energy losses; the weighted average cost of capital; and the cost for prolongation of asset lifespan.

More than that, GNF was obliged to pay a fine of 6.2 million euros for failing to invest the committed minimum in 2015.

“However, in 2015 ANRE failed to adjust on time the tariffs above the recovery level and this fact caused a hole of resources in the power system (a tariff-related deficit of 82 million euros). In this context the distributor acted to reduce the possibility of massive blackouts and preferred to pay off the electricity suppliers. Therefore it was unable to carry out its investment obligations in full,” the Spanish group said in a note for Mold-Street.com.

On the other hand, GNF accused the Parliament and ANRE of acting in a way that harmed GNF mainly, without affecting the other two distribution networks, which are controlled by the state.

“In conclusion, the agreement signed with the IMF and its conditions are apparently fulfilled, but in reality the tariff arrears have not been recovered effectively and the Moldovan authorities cheated both GNF and the Energy Community and the IMF,” Gas Natural Fenosa said.

GNF said it was considering other options, too, such as the return to the arbitration procedures that had started in August 2015.

Ukraine and Moldova are called to form a common energy market

The Energy Community Secretariat recommends, in its report, that Ukraine and Moldova formed a common electricity market. Such an event would let Moldovan wholesale suppliers to benefit from non-discriminatory access to the more competitive supply pools of Ukraine and would boost interconnections for transborder trade. Also, a decision is necessary about what are the most suitable interconnections with Romania. The next projects need to be planted for the enhancing of Moldova’s energy supply security in the future, for a boost to competition on its internal market, and for the benefit of customers, the Secretariat stated.

Lack of concrete progress in the Gas Law implementation

As concerning the gas issue, Moldova yet has to rectify a Law on Natural Gases – either with new amendments or adoption of a secondary law, if possible. The country has achieved no concrete progress towards the harmonizing of its gas legislation to the Energy Community’s requirements.

The Secretariat said the preparations for separation of the gas transportation system from the gas distribution system should start immediately, in compliance with the Third Energy Package; consequently, the properly separated operators should be selected and certified by January 2020. Moldova needs to proceed to the legal and functional separation of such companies as Vestmoldtransgaz, Moldovatransgaz and Chișinău-Gaz.

Until then, the government has to write and enforce new tariff methodologies for the transit of gases and to allow transparent and non-discriminatory operations in the gas market, with a true opening of this market.

ANRE director Tudor Copaci says he sees no reasons for worry. “We still have time and our specialists are working towards the restructuring of the sector and improving the laws,” he said.

The Secretariat though wants new rules for supplier change in order to improve the competitiveness and liquidity of the gas market, pointing that an effective competition between suppliers will begin after the elimination of all exclusive rights for existing operators.

Things don’t fare better in the field of renewable energy generation. The postponed entry into force of the Law on Promotion of Renewable Source Energy is pushing away the time when the country will be able to comply with the EU norms in this field. The Energy Community report says the Moldovan government has to adopt new rules for the contest of renewable energy projects and to simplify the administrative procedures and methodology for evaluation of the costs for connection to the transportation and distribution networks. A rigid monitoring of these measures by the Economy and Infrastructure Ministry later on will be crucial, it noted.

There’s also a problem with the regulatory framework for production of bio-fuels, which lacks clear criteria for sustainability and adequate incentives. The deficit of progress determines the stagnation of the agricultural sector, which has a significant potential for turning vegetal waste into bio-fuels. Moldova aims to achieve a 10% share for bio-fuels by 2020. Instead the country will rely on the importation of bio-fuels, the report says.

During year 2017, Moldova has reported a major progress thanks to adoption of regulations that were necessary for the enforcement of the Energy Efficiency in Buildings Directive and the elaboration of a draft law on energy efficiency for transposing the Directive.

Pointing out to the climate changes, the Energy Community Secretariat says that Moldova has followed the steps that were mentioned in the last year report, except for the priorities related to the directives concerning the large burning installations and industrial emissions. Nonetheless its government has to begin without delay the adjustment of the national laws to the relevant clauses of the directives. Otherwise, Moldova is likely to be sanctioned.

The financial and technical capabilities of Moldova are limited; therefore these challenges remain serious impediments in the way of compliance with its commitments under the climate change arrangements.

The Secretariat’s report says Moldova needs to set up a system for monitoring and reporting on greenhouse emissions and to collect relevant information about climate changes within its territory – “as soon as possible.”

The Energy Community was created in October 2005 with the main purpose of expanding the internal energy market of the European Union onto South-Eastern Europe and farther, based on agreements with legally-binding effects. The organization includes the EU member states, Albania, Bosnia, Georgia, Macedonia, Kosovo, Moldova, Montenegro, Serbia, and Ukraine.