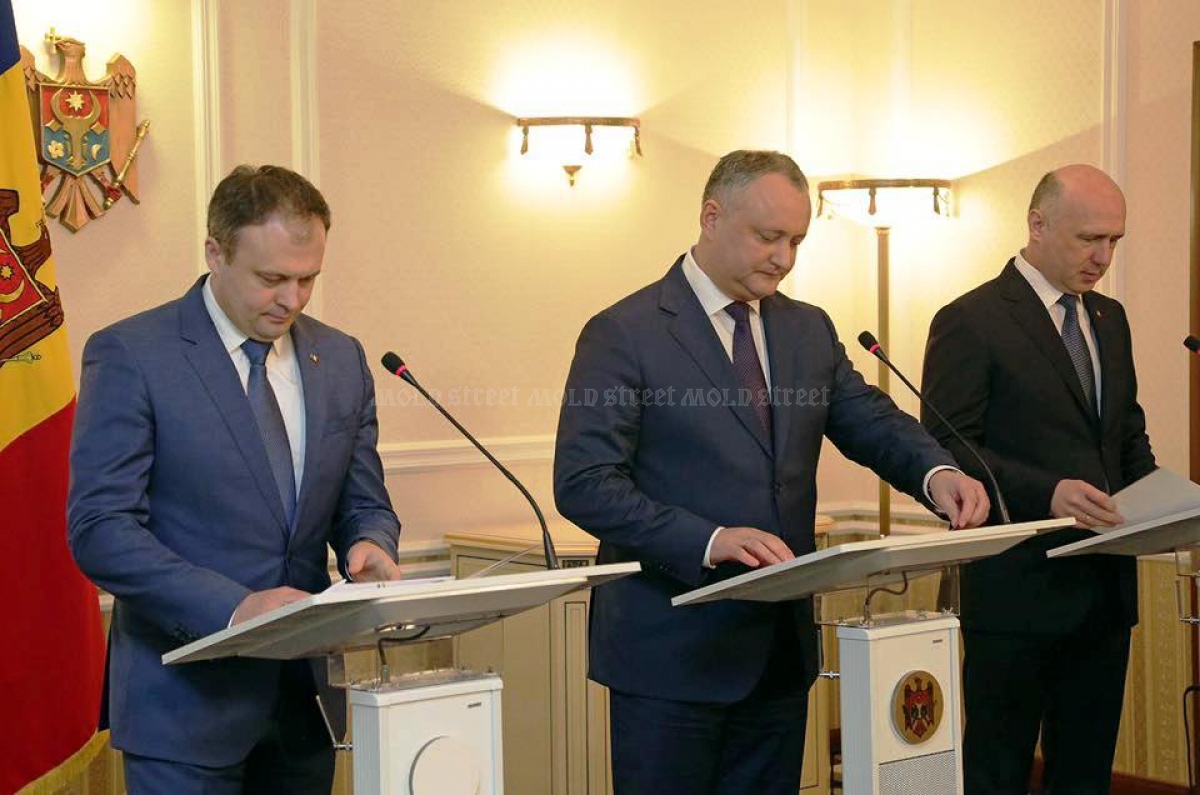 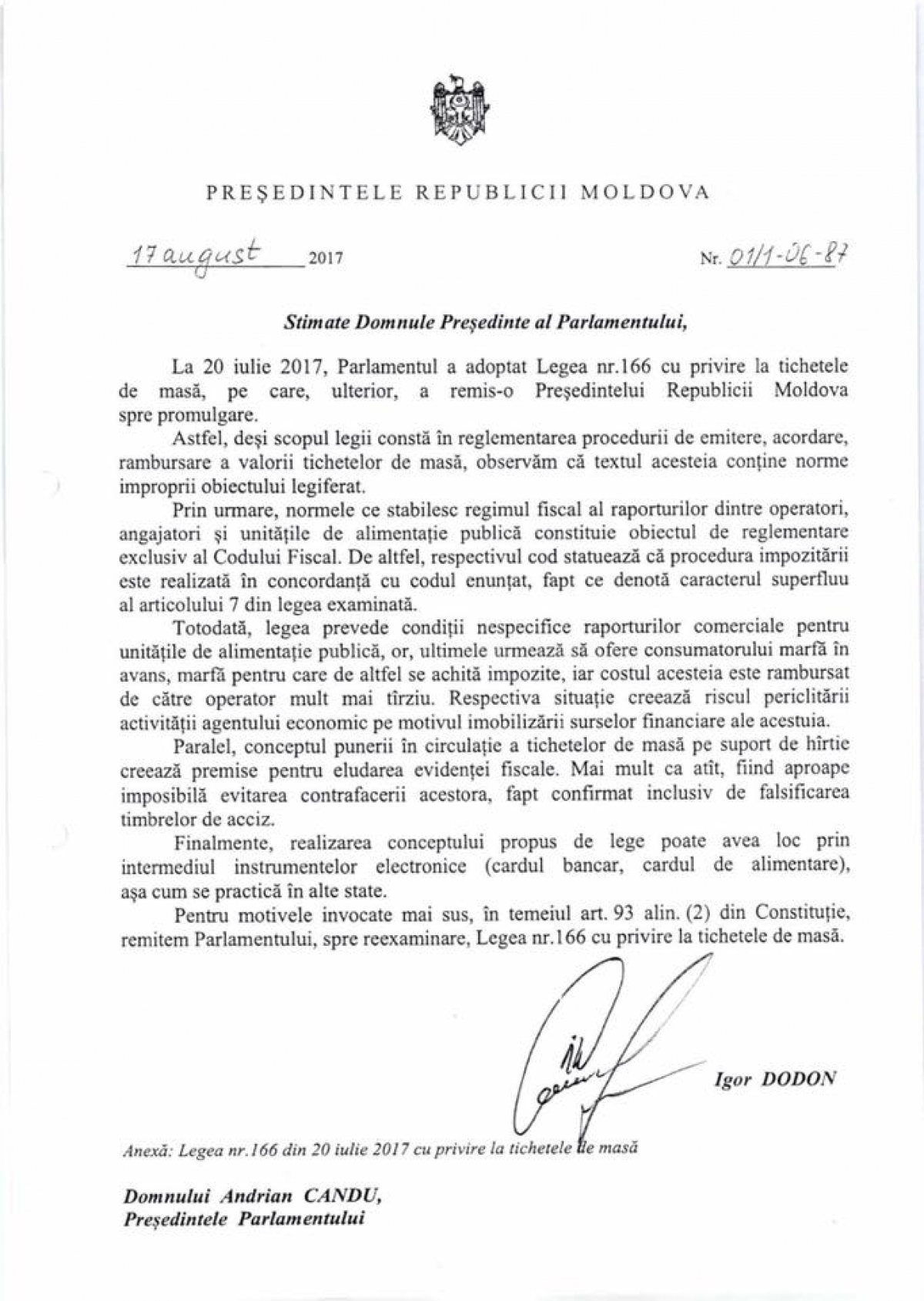 Photocopy of Dodon's arguments against the Draft Law on Meal Tickets.

BNS
The Moldovan Parliament convened on Thursday, September 21, in its first plenary session of the autumn-winter period in order to cast a repeated vote in favor of nine draft laws that had been turned down by President Igor Dodon.

The lawmakers also want to pick up a candidate for the defense ministry leadership and search for evidence of constitutional breaches by the chief of state.

Parliament Speaker Andrian Candu announced that three more draft laws were still being debated within commissions and would be added to the agenda some time later.

Mr. Candu earlier argued that both the economy and ordinary citizens needed the legislation in question and that Mr. Dodon was hiding behind personal vanity and interests.

"We believe it is unacceptable to deprive the citizens of Moldova from certain benefits these laws will bring, just because President Dodon cherishes certain interests or vanity. Dodon’s selfishness must not harm the lives of citizens," the head of parliament stated.

There was an immediate reply from President Dodon, who accused the Democratic leader of parliament of manipulating the public opinion regarding the true reasons for which the legislative majority needed those laws. He explained why he rejected the drafts.

"In this context, some clarification is necessary: the bills which I have refused to promulgate and which the Parliament seeks to pass urgently refer to subjects of major importance for our society. I attached the explanations why I did so to each one of them," Igor Dodon noted in a Facebook post.

Both Candu and Dodon were specific on three or four laws only out of nine that await a new vote amid the president-parliament ping-pong.

Mold-Street has reviewed the reasons why the president turned down the laws in question and why they matter for Moldova:

1. Law on Energy Security. This document gained commission approvals and a first positive vote in Parliament in late 2016 but Igor Dodon noted that it would give "the National Energy Regulatory Agency (ANRE) the privilege to write by itself its own budget and to control the size of wages of its employees, a prerogative that rests with the lawmaker."

"The wages in public institutions starting with regulatory agencies and finishing with state-owned enterprises may not be significantly larger than the wages of teachers, doctors, and other specialists who are truly important for this country," Mr. Dodon wrote in his post.

And yet this law, once enforced, would enhance the independence of ANRE, in compliance with the E.U.’s Third Energy Package requirements, and would let the regulator impose financial penalties and sanctions to operators in the market.

2. Amendments to the Code of Science and Innovation and the Code of Education are designed to reform the Moldovan Academy of Sciences. According to Dodon, the proposed changes would literally kill the Academy and would isolate the national education and science system from the international one. "I am absolutely convinced that the true purpose of these initiatives is to strip the Academy of Sciences of its properties: buildings and fields, which later would be sold," the head of state maintained.

Indeed the initiatives provide for transmission of all research institutes from the Academy into the subordination of the Education Ministry while giving control over the Academy’s assets to another agency. And the Moldovan Academy of Sciences may be described as a “rich” establishment: according to the latest assessments in late 2015, its 26 institutes own assets of around 1.3 billion lei.

This figure reflects the official registers but not the market values.

The academic society, too, criticized the initiatives that the Government and the Parliament hastily approved. For example, Academician Teodor Furdui, head of the Academician Council, asked Prime Minister Pavel Filip in an open letter to stop what he called “a stupid reform”. The authorities had not sought any prior opinions from the academic society and continuing this reform would be “a fatal mistake” and would “paralyze the scientific activity” in Moldova, Mr. Furdui said.

3. Amendments to the Labor Code. These initiatives appeared partly at the insistence of the business environment, as the present-day Labor Code looks like a book of archaisms. Some initiatives translate four directives of the European Union regarding labor legislation and others adjust the existing regulations to the requirements of the modern market economy.

The president said he feared that the changes would harm the socially-vulnerable groups of society, in particular veteran mothers and retired elderly. Among others, the Government proposed: cutting the period of additional unpaid leaves for child care from six down to four years; enabling employers to fire employees who reach the retirement age; sparing enterprises and institutions from registering their contracts with employees.

On the other hand, foreign investors claim that in its actual form, the Moldovan Labor Code poses serious impediments to effective entrepreneurships.

"Flexible labor relationships represent an important factor for creation of a competitive economy, which is able to easily adapt to the market conditions," says the 2017 White Book of the Foreign Investors Association. While the organization greets the labor initiatives it also recommends that Moldova drafted a new Labor Code.

4. Law on Meal Tickets. Speaker Andrian Candu is the “parent” of this document, which sets out a supplementary social protection mechanism for employees by allowing employers to share meal tickets worth 45 lei (a bit more than 2$). This sum would be a supplement to workers’ basic wage and the tickets could be used in canteens, cafes, restaurants or in food stores. Tickets would not be exchangeable for cash or a reason to cut down wages. According to Mr. Candu, this initiative aims to reduce informal remuneration and tax evasion. Some European states have enforced a similar mechanism, such as Italy, France, the Czech Republic, Hungary, and Romania among them, the author argued.

President Igor Dodon on the contrary sees “a plan for a big tax evasion” behind this initiative. Nor is the expert community happy with the Candu initiative. Expert-Grup, a think-tank in Chisinau, said the tickets-for-meal proposal would not help to solve the problems which Mr. Candu had named.

5. Law on Prevention and Fight against Terror. This document builds a law and organizational framework for prevention and fight against terror in Moldova, and a basis for coordination of the anti-terror units, standard responses from the central and local public authorities, businesses and civilian services.

President Dodon declined the document on the ground that the activities related to the prevention and fight against terror, or the management of the Operational Anti-Terror Center was no longer a matter under his jurisdiction. This is a parliamentary business and a direct competence of its speaker, he observed.

6. Amendments to the Law on State Awards. President Dodon explained that he was rejecting this initiative on the ground that it provided for the institution of jubilee and commemorative Crosses as distinct awards. There are sufficient state awards and no new medals or crosses are necessary, the chief of state defended his decision, adding that it was unclear who would cover the expenses for these new awards.

8. Amendments to the Law on Roads (Articles 1, 2, 3, etc.) and to the Fiscal Code (Title IX, Annexes 5 and 6). The reason why the president rejected the changes here were not immediately available.

9. Law on Environment Protection (Articles 3, 8, 10, 15, 16). In compliance with the Government’s proposals, the above-mentioned articles need to be updated in order to improve the mechanism of calculation of fees for pollution and pollution control procedures. In particular, the authorities want to hack the fees for packaging made of cardboard, plastic, and aluminum.

The president in his response said that the legislative innovations would harm domestic producers but favor importers unjustifiably. Also, the public revenue coffers would receive less cash while businesses and individuals would be exempted from covering the damage for pollution, he argued. Mr. Dodon pointed to Finance Ministry estimates showing that the national budget would lose around 140 million lei in 2017 alone should the changes to the environmental legislation take effect.

The amendments to the Law on Environment Protection are present in the parliamentary session agenda, which was delivered to journalists by email, but they are absent on the Parliament’s website.