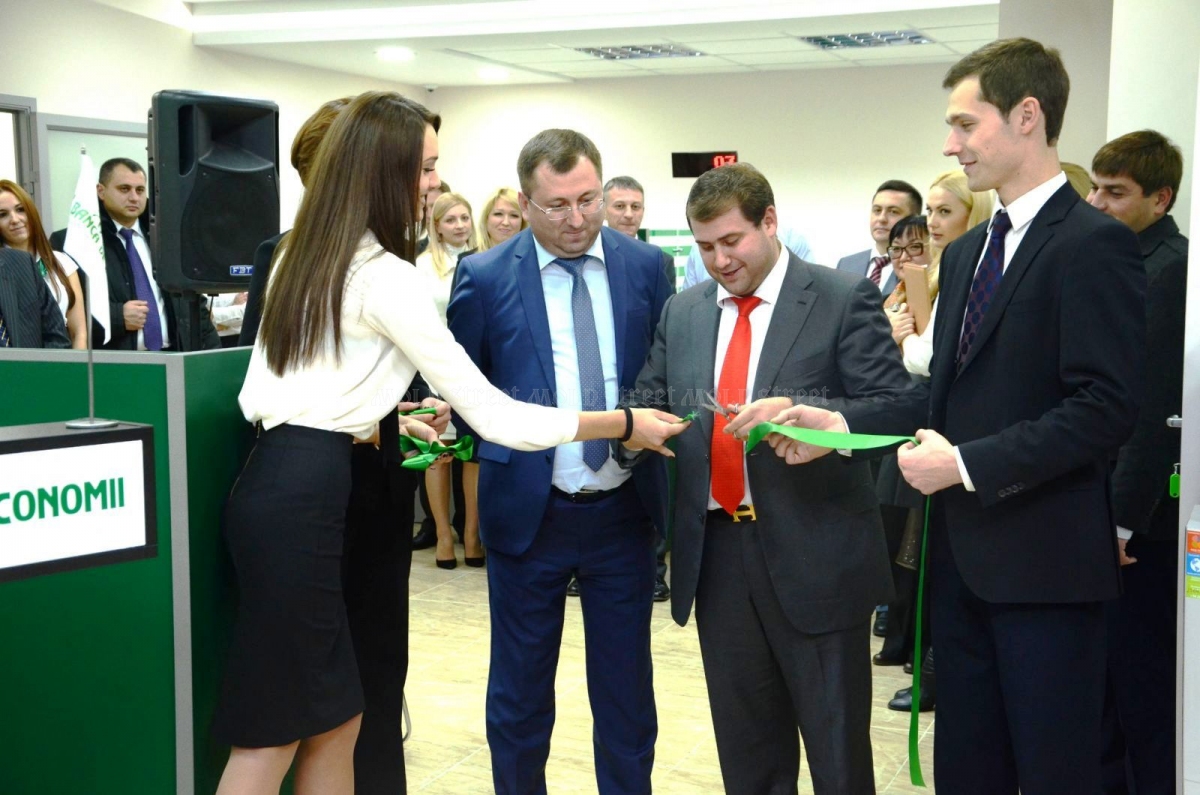 October 29, 2014. Ilan Shor opens 50th branch of BEM. In one month Government buys the bank with a 9 million leu hole 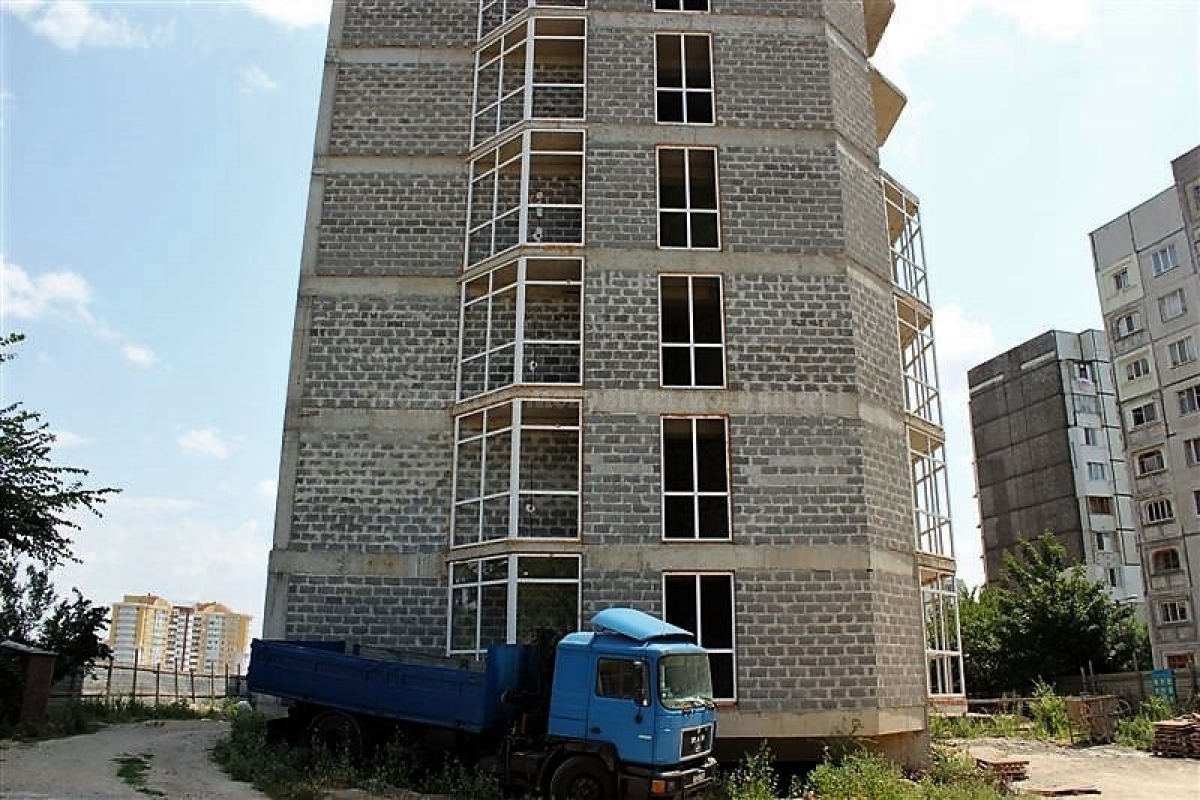 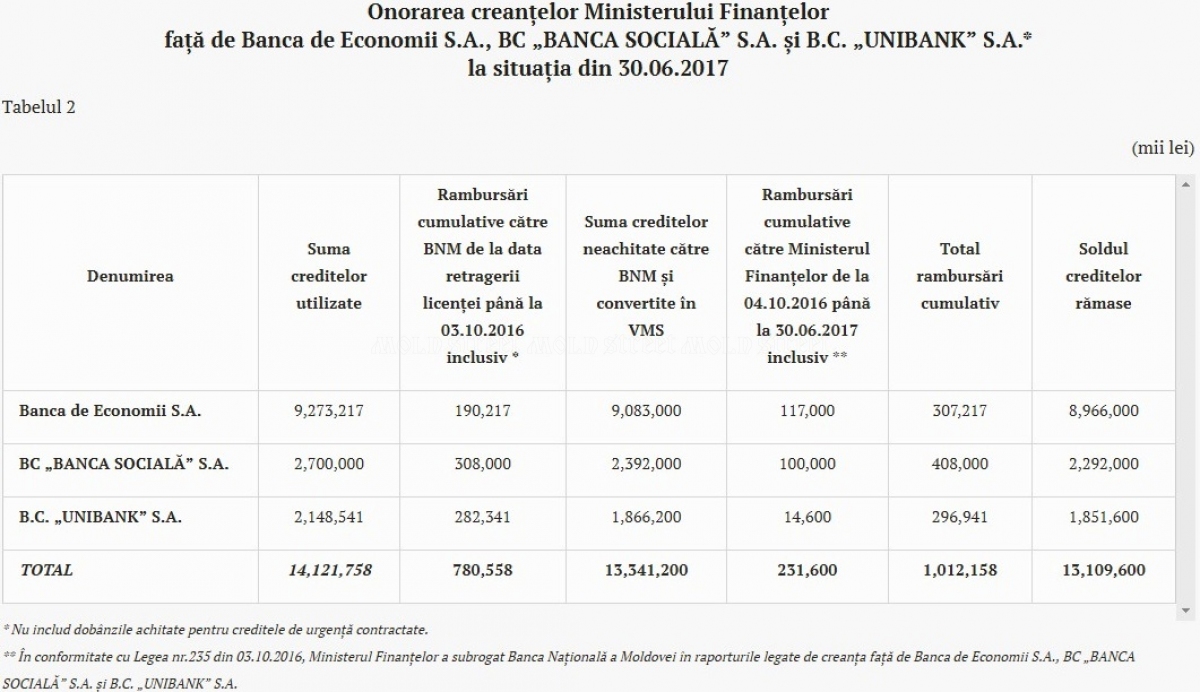 Table showing how much has been collected from the banks. 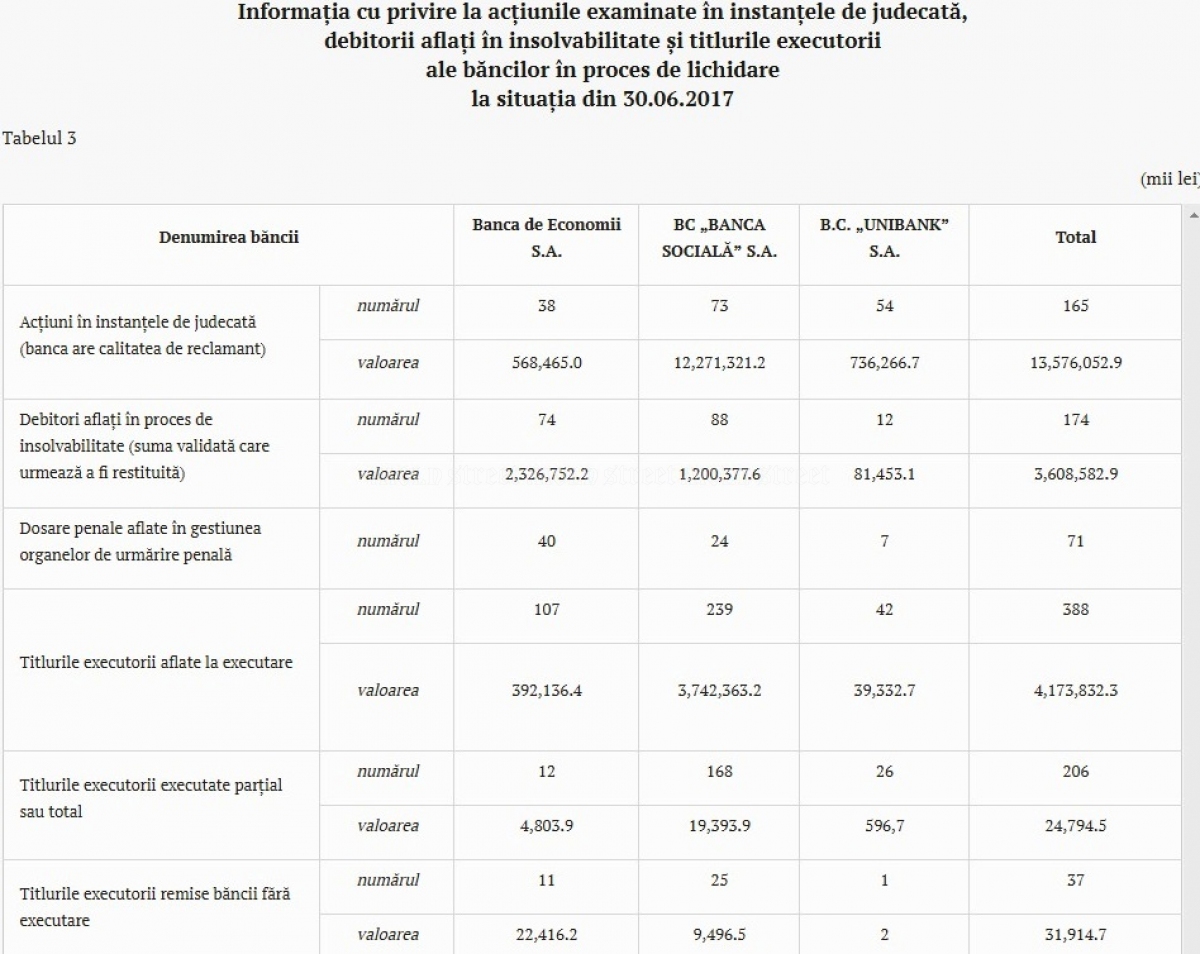 BNS
Since Banca de Economii, Banca Sociala and Unibank lost their licenses on October 16, 2015, until June 30, 2017, the provisional administrators who handle their closure and bankruptcy procedures collected a total amount of 847.66 million lei in recovery cash, the National Bank of Moldova (BNM) has announced.

Translation from Romanian. The original text is HERE.

The amount recovered represents only 6% of the amount of state guaranteed loans worth 14,121.76 million lei granted between November 2014 and October 2015 by the BNM to the three financial institutions.

In June, less than 17 million lei was recovered

In recent months, however, the pace of recovery has slowed down. In June 2017 the collections amounted to 16.6 million lei only.

Nonetheless recovery, as BNM explains, does not mean that the full debt is being paid back. Reimbursement collections make up the largest share of all debts (reimbursements plus pledge sale-offs) upon the emergency loans. The resources frozen on the accounts of the three banks at the date of license withdrawal were used to cover the expenses related to the closure process and to pay off promissory notes towards the Finance Ministry.

"From the date the licenses were withdrawn and until 30.06.2017 including, the government-appointed administrators of three bankrupt banks repaid to the National Bank (until 03.10.2016 including) and to the Ministry of Finance (as of 04.10.2016) a part of the debts related to the emergency loans granted to [these] banks up to at the appointment of the new administrators, who are obliged to deal first with the collection of first class notes," a central bank press release reads.

BNM reports show that since the date of license withdrawal until October 3, 2016, when according to the infamous Law no. 235, the guarantees issued by the Finance Ministry and the Leanca Government officially turned into a state debt, the three banks had reimbursed 780.56 million lei.

As a result, the Finance Ministry issued and submitted to the National Bank state bonds worth 13.34 billion lei.

From October 3, 2016 until June 30, 2017, another 231.6 million lei was reimbursed. As a consequence, by the end of June the authorities succeeded to collect a bit more than one billion lei while 13.11 billion lei (about 725 million dollars) was yet to be recovered.

The central bank said the government-appointed administrators continued their efforts to have the loans back in the public coffers.

"The administrators cooperate closely with investigators and with the courts, and the continued the auctions where the assets of the three banks were sold and continued their work with debtors; the final goal is the full repayment of the ordinary and emergency loans ," BNM stressed.

The central bank also published a list of legal measures that were being handled by Moldovan courts against debtors of banks.

On paper, all money came back

Meanwhile in courts, the three banks filed 165 lawsuits for recovery of the loans which they had generously shared until the end of November 2014; the total claims account for 13.57 billion lei. In theory, BEM, Banca Sociala and Unibank have the necessary money and assets, and should the judges rule in their favor, the debts are as if recovered.

The websites of the banks give readers a clue who the banks’ debtors are.

BEM, for example, has published a list of 80 assets each of which is worth more than one million lei; altogether they would bring the bank over 450 million lei. Another 241 assets are estimated at less than one million lei apiece. The shares (10.2%) in Moldasig, a broke insurance company, are valued at 34.9 million lei and the bank’s headquarters in Columna Street in the capital costs at least 33 million lei.

The list includes distilled brandy worth more than 30 million lei, a few firms, and an unfinished residential block with over 130 apartments in Dumeniuc Street of Chisinau – of which 29 cost more than one million lei each. The building work was carried out by a company of businessman Ivan Tomaili, a suspected crook, who in 2011 received about 60 million in loans from BEM for his real estate project. In May 2015 the businessman was held by the National Anticorruption Center over his failure to pay back more than 100 million lei in loans taken back in 2009-2011.

BEM is also trying to get rid of wine barrels, motor cars, ATMs, garages, hardware and equipment, computers, etc. Although for many of these items the price has dropped the bank has not been able to find buyers for years.

Banca Sociala on its side seeks for a buyer for a railway portion in the city of Bălți and a share of 99% in Ceproserving, a local joint-stock company, which was estimated at over 55 million lei. Bailiffs and governmental administrators are supporting the efforts of these banks to sell the goods.

According to the central bank, as many as 388 executive orders were issued by June 30, 2017 in relation to recovery of 4.17 million lei, of which 206 orders have been enforced in full or in part and just 24.8 million lei has been recovered. This means that enforcement was successful in just less than one percent of cases. Another 37 orders for 31.9 million lei were issued to the defunct banks without any enforcing perspective. The judiciary agencies are managing now 71 lawsuits related to the 2014 financial fraud.

BNM said it had told the three banks to publish every month summary reports on cash recovery and detailed descriptions about the assets for sale, on their websites. One can find some of this information – the largest part of assets is still being hunted by the American company Kroll.

The National Bank of Moldova also mentions in its release that the Banca Sociala had received four final court decisions that obliged the bank to claim more than 12 billion lei from four companies that were part of the group run by millionaire businessman Ilan Shor – a major suspect in the fraud. None of those decisions is available to the public and the reasons are now known so far. One of Shor’s companies, Caritas Group SRL, has been cited as a defendant in the suits but no information about it appears on the courts’ websites.

Legal actions are also underway against Voximar-Com SRL, for around 3 billion lei, but the company has filed for an appeal.