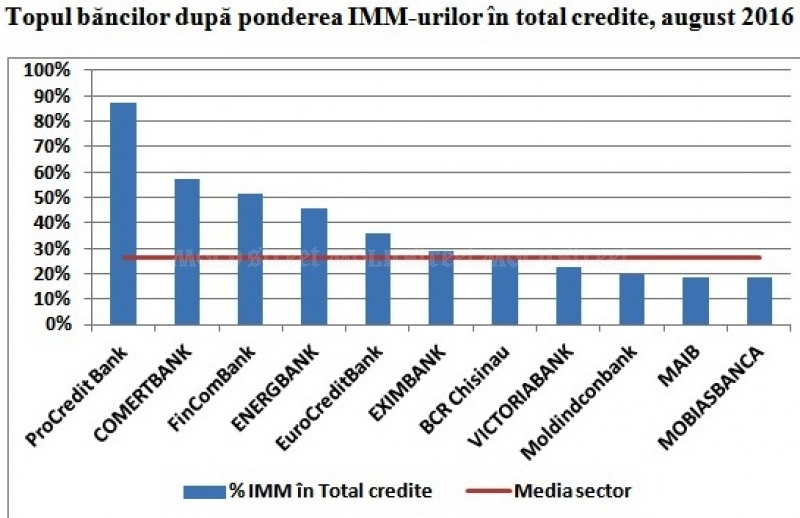 BNS
A dangerous setting is hiding behind the cheering reports of the Moldovan authorities. The effects of this setting can be noticed in the bank sector where loans are rarer and an increasing number of old credit obligations fail.

One of the best methods to look at the state of economy is to analyze the situation in the bank sector and the credit dynamic and the credit portfolio are probably the best indicators to build up the story.

In the first semester the Moldovan economy showed a 1.3% growth in official statistics but this result was a conjuncture-related and outlines a number of risks rather that the expected stability. Foreign trade remained on a negative trend (exports: -8.8%, imports: 5.9%); foreign direct investments stayed almost frozen; investments in long-term assets decreased (-21%); transportation services declined too (-12%).

These retreats beat even the comparative base of year 2015, which was a bad one and emphasized the fact that Moldova lost even more speed.

This picture can be easily copied out from the regular reports of the local commercial banks. Compared with the similar period of 2015 the volume of new loans was smaller and repayments have over passed the volume of borrowings. At the end of August the aggregated portfolio in the bank system showed a 2.7% decrease compared to the beginning of year.

There are at least three factors to explain the negative dynamic of lending:

• Economic uncertainty discourages new investments and this in turn slows down the demand for loans.

• Banks’ appetite for risks is inhibited by the alternative of decent profits from the trade with state bonds. The local banks made a big deal of money from the agony of the state, which was desperate to cover the budgetary deficit from internal resources on the background of frozen international assistance. In the eight months of 2016 the local commercial banks earned around 830 million lei from state bonds – this is more than 2.2 times the amount earned in the similar period of 2015.

Looking at the credit portfolio, readers may see that in early September the largest three banks – which have been under the central bank’s special supervision since June 2015 – accounted for almost 70% of the loan resources.

Moldindconbank, Eximbank, and Victoriabank reported the fastest decreasing loan portfolios at the beginning of year. 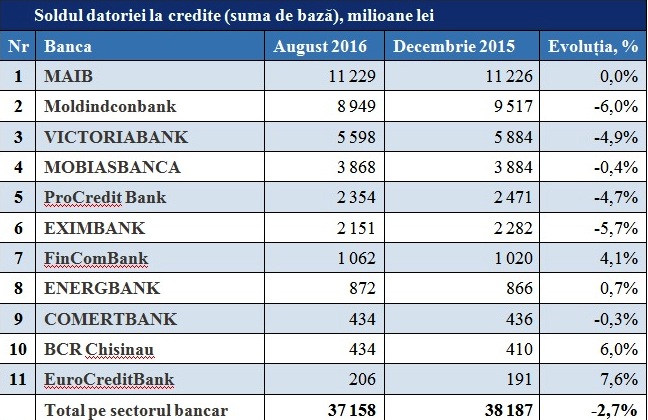 Fall of base rate helped government, not economy

Readers should bear in mind that given the economic conjuncture the National Bank of Moldova (BNM) shifted to a relaxed monetary policy in early 2016, in a hope to boost the loan-lending activities. BNM chopped the base rate from 10 per cent points to 19.5% and then to 9.5%. This measure however helped the government at a greater extent than the real economy. Although the average interest rate per Moldovan bank system dropped by 2.38 per cent points, down to 13.7%, it did not produce any incentives for the lending process.

If in the first quarter the Finance Ministry had borrowed money at an interest rate of 24-26%, in August the borrowing costs dropped two fold to 10-11% on average for state bonds.

Government in a conflict of interests with economy

During the last year the government of Moldova collided in a sort of conflict of interest with its economy. Even though one of the 7 pillars of the 2020 Development Strategy calls for accessible and cheap finances, the massive purchase of state bonds from commercial banks actually limited the access of the real economy sector to credits.

Some might imagine that commercial banks sleep on a mount of liquidities and shut the door in the nose of loan seeking businesses – this is just a groundless perception. Although the share of liquid assets in the total reached 46% in August, bank themselves have very little space for lending flexing.

First, it’s because a large part of liquidities in banks’ ownership was given for short terms while the demand for loans stands basically for long-term resources.

For example, 95% of deposits which Moldovan commercial banks attracted in the period January through August had been short-term liabilities under 12 months. At the same time, 85% of new loans had been released for terms larger than 12 months; this complicates the returns of liabilities on maturity.

On the other hand, BNM, which is aware of the negative macroeconomic landscape as described above, maintains the size of mandatory reserves in Moldovan currency and non-convertible at 35% of the basis of calculation. In other words, the commercial banks are obliged to keep in their reserves one third of all attracted deposits in lei, for the purpose to minimize the risks.

Plus 2.3 billion in bad credits

The risks are obvious and banks can feel them while the share of failing credits continues to rise. Since early January this share has increased by about 2.3 billion lei, up to 6.13 billion.

It is Victoriabank where the credit portfolio was eroded worst – bad credits increased 3.5 fold, up to 1.84 billion lei. In this context it is necessary to mention that aside from the worsening financial capacity of debtors, the requirements for credit classifications have tightened too.

Victoriabank is a kind of relevant example in this regard, because the volume of bad credits in this bank jumped up after the completion of an external audit, and one of its effects was the enforcement of a new classification, which rated many credits as bad. 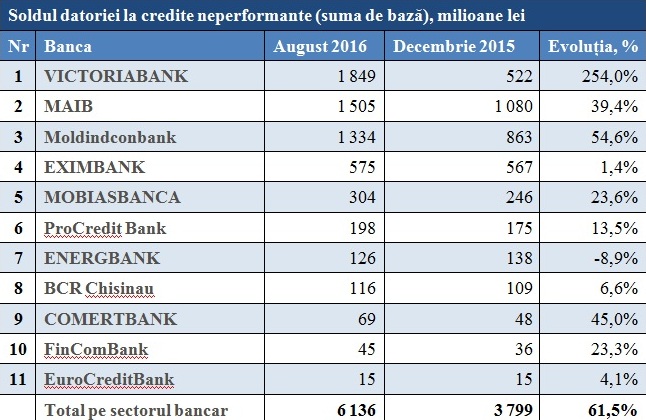 BNM governor Sergiu Cioclea addressed the issue of bad credits at a meeting with the parliamentary commission for economy, budget and finance.

„We are witnessing a decaying state of liabilities in the banking system. Debtors are sliding towards arrears and this creates a new pressure. The total share of failing credits per system went up from 8.4% in 2014 to 9.9% in 2015 and to more than 16% at present,” Mr. Cioclea stated. 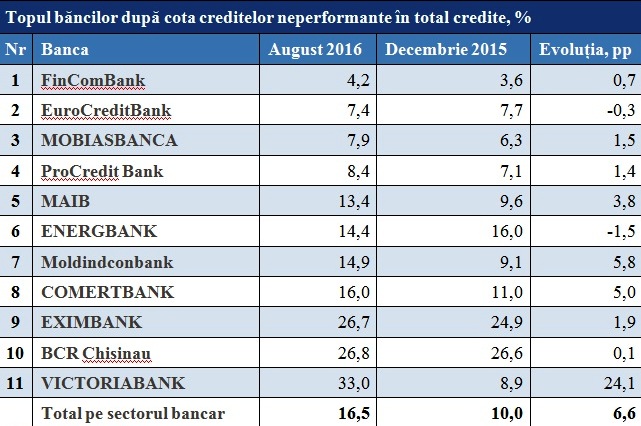 The governor pointed to large companies as the main source that generated bad credits, suggesting that a solid economic growth would be the solution.

„There are many reasons why banks have recorded a growing number of bad credits. First, have a look at large enterprises that have gone bankrupt. They have admitted 100% of losses and creation of reserves in banks. Others are as late on maturity as 30 or 60 days. These too begin to show signs of alert and get partial supplies. On the aggregate, it’s a chain-type problem and once our economy stagnates there will be problems in the lending servicing.

“Yet if our banks released quality credits every month, the share of bad credits would diminish compared with the loans. We are experiencing now a scissor effect: on the one hand, borrowers are unable to repay old loans, on the other hand they [banks] don’t give other loans and the volume decreases while the commission increases. You need to find the standpoints for economic growth, which will help clients solve out their problems and will let banks give healthier loans,” the central bank chief was quoted as saying.

Large enterprises count a lot for the banking system and for the Moldovan economy in general. Although only 2.8% of businesses in Moldova can be referred to as large enterprises, they employ about 45% of all employees in the real sector and generate two thirds of revenues from sales at the national level, according to official data for year 2015. The bank sector in turn looks very dependent on those enterprises; small- and medium-sized firms received just 26.6% of loans that year.

There are banks however which prefer SMEs rather than big businesses. In ProCreditBank for example 87% of loans were given to SMEs, in Comerțbank 57.1% of loans were given to SMEs, and in FinComBank the number is 51.7%. At the same time, the four largest banks are at the bottom of this conventional standing for SME crediting and are therefore most vulnerable to the hardships of big businesses.

In absolute terms, Moldova Agroindbank has the largest loan portfolio for SMEs (2.07 billion lei) and ProCreditBank breathes in its back (2.05 billion lei). 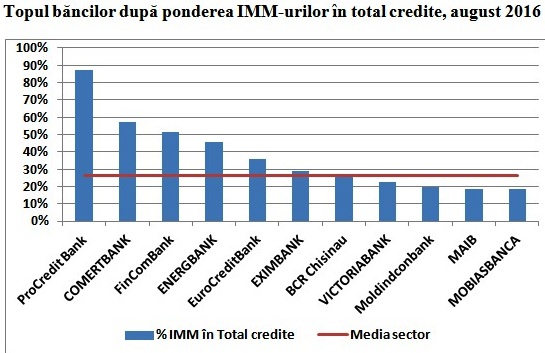 There are many other indicators where readers can deduce the worsening state of debt service of Moldovan enterprises. For example, the State Tax Service reports that as many as 347 enterprises had filed under the bankruptcy clause in the six months of 2016. This is the record high in the past four years.

Looking back at where this article begins, beyond the cheerful news of Moldovan authorities about a strong economic growth in the first half, an analysis of the factors behind that growth generates many motives for concern. A careful review of the elements contributing to growth shows that both the net export (-3.0%) and assets (-1.7%) pushed the economy on the decline and the variation of stocks (difference between entries and exits) rescued the statistical papers, with a contribution of 4 points in favor of growth. In plain words, in the first half of 2016 Moldovan enterprises sold less than they produced and this fact depleted the amount of liquidities and put additional pressure on the circulating capital, causing chain financial jams.

In the present day context the commercial banks in Moldova have eroded their primary role for which a financial institution exists: bring financial intermediation. The effects of a restrictive monetary policy, uncertainty and risks at macroeconomic level, modest evolution of the real sector, and the profitable partnerships between the state and banks on bond trading, all have damaged the credit/deposit account. This account dropped by 7 points down to 69% at the beginning of year.

The central bank chief is quite sharp on this issue:

„One of the challenges with lending is that a big part of banks have invested in state bonds, which were very profitable. I hope to break this ground. It is an upside-down situation with our banks right now, a lot of pressure on banks’ profitableness, as they have to withdraw money for the loan risk reserves. I believe it won’t as nice as today at the end of the year, because we were very tough to make the banks recognize the risks wherever they are and to create supply themselves with reserves in order to avoid new surprises in the future,” Mr. Cioclea told lawmakers. 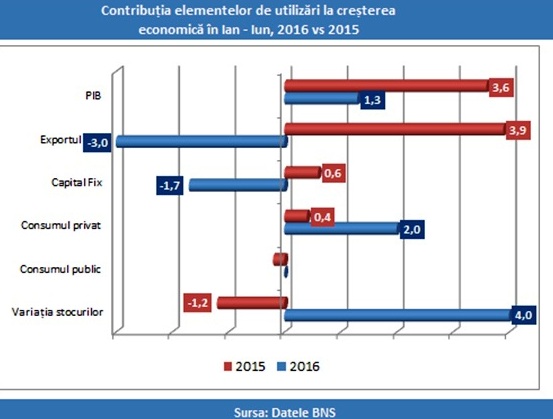 In any way the bank sector is a genuine mirror and an objective narrator of the state of economy. Beyond BNM’s policies Moldova’s economy needs a sustainable growth based on competitive exports, attraction of foreign direct investments, and incentives for small businesses. A mixture of this represent the best antidote for the bank sector itself after all.