Millionaires from public money: Who are the managers who earn millions by working for government? 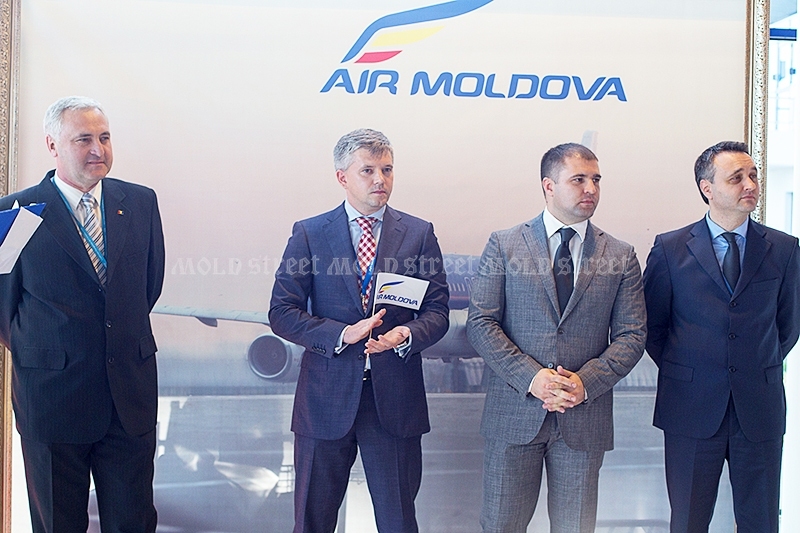 Iurie Armaşu (first from right) was the best-paid state manager 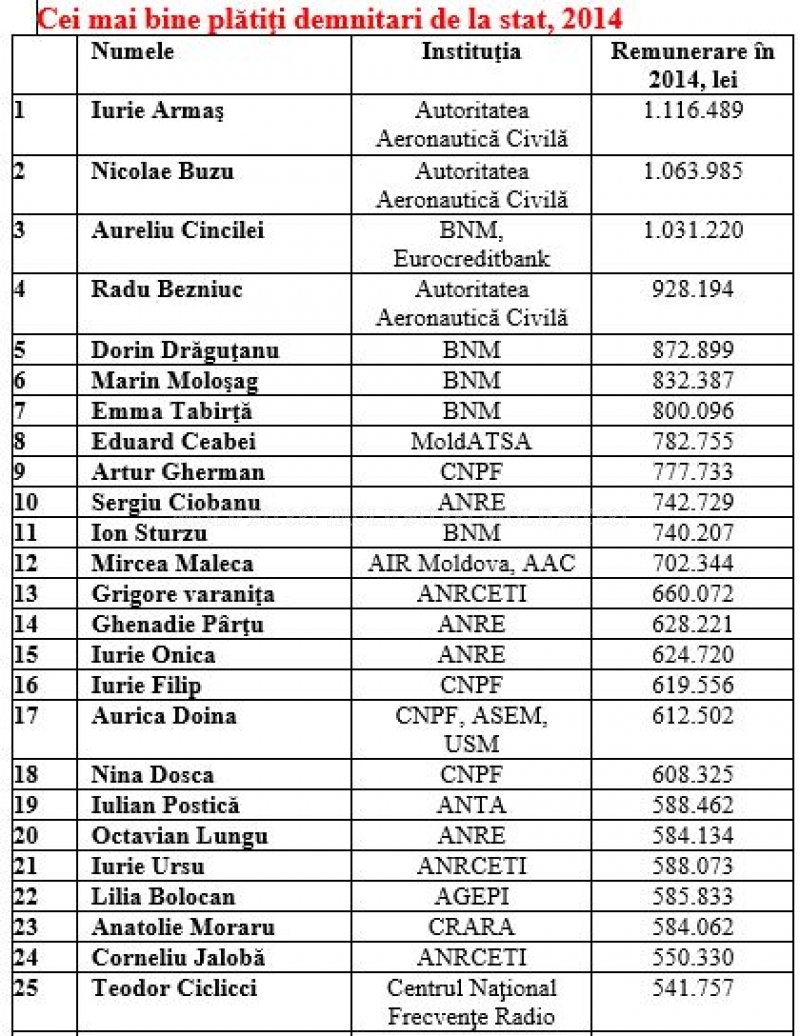 Table of state managers, as paid

The salaries which the government pays to the managers of its agencies and organizations, either autonomous or under ministerial subordination, are 4-5 and even tens fold larger than the salaries raised by the top political leaderships.

They run authorities with millions of dollars in their budget, they oversee or regulate markets worth hundreds of millions of dollars, they set up the price of public utilities, they protect us against monopolists, and they scare off the thieves of public money; virtually no one can do business in Moldova without getting in interaction with these people.

They sit high as directors of state agencies, commissions, authorities, enterprises, having grabbed huge powers and benefiting of salaries that sometimes exceed one million lei ($ 50,000) a year. Most of these directors are not familiar to the ordinary citizens and rarely show up in public. However, they are the first to fall during a government change. Perhaps this is the reason why the struggle for these positions is so fierce and rough.

The income statements which some directors are obliged to submit every year show that they were paid 4-5 or even ten-fold better than the top political leaderships in Moldova – the president, the prime minister, or the parliament chairman.

Three managers with salaries larger than one million

Iurie Armașu, who was the director of the Moldovan Civilian Aeronautical Authority (AAC) between November 2013 and June 2015, had reported a gross salary of 1,166,489 lei, which means he raised almost 100,000 lei ($ 5,000) a month. He was sacked when prosecutors filed criminal charges for allowing the conversion of 3 million lei from the AAC bank account into euros, at a time when the European common currency’s rate changed for 28 lei apiece. The fluctuation was strong and days later the cost of euros dropped significantly and so did the AAC’s reserves.

This case seems to confirm the fears that a generous remuneration for a public functionary would not safeguard the public budget from fraud or corruption.

The new director, Mircea Maleca, was paid 702.344 lei; until 2014 he was the manager of the national air carrier Air Moldova. As the government explains why its managers in the civilian aviation industry get paid so well, “this sector is known for a high level of remuneration, given the specific of this sector and the interaction with the international environment.”

The National Bank of Moldova (BNM) is just another strategic institution where the government-employed managers are paid better than President Nicolae Timofti – 60,000 to 70,000 lei a month. If you look in their income declarations, you’ll learn that Artur Cincilei, BNM’s deputy governor, was the best paid – more than one million lei in 2014, including a gross salary of 739,059 lei and a bonus of 292,161 lei from Eurocreditbank, where he was a board director on behalf of the government (which controlled a 20% share in Eurocreditbank). BNM is suspected of letting the one-billion-dollar fraud in the Moldovan bank sector happen, though its role is to prevent such crimes.

Then, Artur Gherman, ex-director of the National Financial Market Commission (CNFP), and Sergiu Ciobanu, director of the National Energy Regulatory Agency (ANRE), too, earned more than 700,000 lei in 2014. These authorities paid more than 600,000 lei to a few more people: Iurie Onica and Ghenadie Pârțu (ANRE); Nina Dosca, Aurica Doina and Iurie Filip (CNPF); and Grigore Varanița (ANRCETI). The list may go on. These authorities are not alone to experience the government’s generosity, one may look at the National Motor Transportation Agency ANTA, the National Radio Frequencies Center (CNFR), the Intellectual Property Protection Agency (AGEPI).

Cutting down salaries and bonuses

The fabulous salaries of these managers might be cut down. This is an initiative of six Communist lawmakers who want to set up the remuneration of state managers at 95% of officials whose competence is to appoint the managers. The argument for this initiative, which would modify the Law on Remuneration in the Budgetary System, is “the need to exclude abuses in the area.”

"It’s no logic in the fact that an agency which is created by our Parliament uses the budget to increase the salaries of its managers to astronomic amounts. We have to lower their salaries to avoid popular discontent,” said Oleg Reidman, one of the initiative’s backers. The size of bonuses, too, is targeted for restriction – down to six monthly base salaries.

Attempts to make things clear in the remuneration policy similar to this initiative had existed in the past as well; none however provided for sticks for bad performance in addition to the carrots. Generous remuneration for the managers of these institutions is seen as a guarantee for their independence.